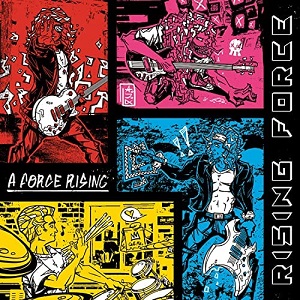 From the moment the gargantuan riffage starts to come through our speakers with the opening track “Throw,” it’s more than obvious that we’re in for a thrashy rock n’ roll throw-down in the new album A Force Rising from Rising Force.

Although there’s been some discussion of metal being somewhat irrelevant to the current discussion when it comes to heavy music and the textural presence of melodic rock, there’s scarcely a moment in this new album from Rising Force that would suggest even the slightest interest in what the media narrative is on the part of the band. On the contrary, this is a unit that seems wholly devoted to the crushing tonality that comes with making chaotic, ethereally violent rock n’ roll music, and between tracks like “Round Two” and the neo-punk “Bondage,” there’s no disputing the theme this band was going for.

“Drive” and “Your Girl” throw a lot of weight around, but there’s no denying that their sonic substance is derived from the guitar’s wallop as opposed to anything else behind the board. One of the more unfortunate qualities I’ve been coming across in noisy rock of this variety has been a lot of synthetic noise, the worst of which has sounded like something straight off of a midnight television’s broken broadcast, but you won’t find anything of the sort in this record. A Force Rising embraces its punky black-and-white noise when and where it counts for something, and as far as the rest of the time is concerned, there’s never an instance where Rising Force sound anything but focused on conveying a very specific narrative.

“The Rise” and “The Fall” are inseparable in this tracklist, and despite the overall progressive feel of the storyline unfolding in A Force Rising, I don’t feel as though the underlying conceptualism is geared towards music nerds exclusively. It’s hard to make a rock opera that doesn’t fall into the traps left behind by the campiest of these recordings, but Rising Force sounds like they’re going to great lengths just to avoid such issues, particularly when it comes to making smooth, undramatic transitions in the tracklist. As theatrical as we can get in this record, we’re never contending with the kind of bombast that has plagued good bands trying to do something as potent – and larger-than-life – as this particular performance is.

“Farewell” carries us across the finish line in this LP with a smooth pop element you might not initially expect, but I can assure you that you’ll enjoy it as much as I did if you appreciate the dexterity of the melodicism Rising Force is sporting from beginning to end in this album. A Force Rising is, more or less, exactly what its name would lead us to believe it could be, but it’s not quite the pretentious nonsense that a lot of this band’s closest scene peers would like us to believe it should be. From where I’m sitting now, Rising Force is doing what rockers ought to be in 2023, which is growing from the bottom up with a sensibility for experimentation that few are trying for themselves at the moment.