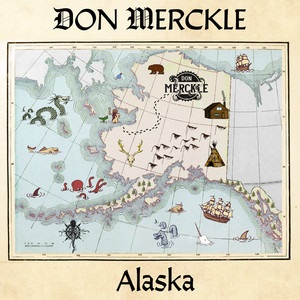 The contemporary singer/songwriter movement has brought us a lot of different forms of magic in the past few years, but there hasn’t been nearly as much humility coming out of its underground as one might expect there should be.

In a generation that has been as equally focused on self-expression as it has been the essence of attention-attracting songcraft, a player like Don Merckle stands out a lot this winter with his new single “Alaska.” “Alaska” is a piece that lives and dies by the efficiency of its verse, but there’s a lot more to be said about what this song’s message is behind the lyrics it presents with such intrepid ease.

Merckle’s prose hits us with a rather sharp human element that has been missing from a lot of singer/songwriter content to debut in the past few months, and whether it be the words he’s crooning or the framework through which he is making their greater sentiments obvious to the audience, this is a performance that is bound to leave those who press the play button curious about the man on the other end of the speakers.

Merckle’s attitude when it comes to harmony in this single is one of liberalism and practical melodicism, but rarely does it ever sound like he has indulgence on his mind. There’s a singularity to the way he’s building these lyrics that is hard to take my mind off of once he starts singing, but at the same time, I feel like he doesn’t want to apply too much pressure to this arrangement – after all, it works so brilliantly as a relaxed piece of folk-rock.

As much as I would be curious in hearing another remixed version of this song, if for no other reason than to examine the bones of the composition away from its pastoral origins, there’s something here that suggests it wouldn’t work any other way than this, and that’s intentional on the part of Merckle. He wants to invite us into a narrative that can only exist on his terms in “Alaska,” which is perhaps the most surreal angle a player of his persuasion can take in this instance.

I’ve got a lot of questions as to what he’s going to do with this piece in a live performance, and until I get a chance to see him perform in person, “Alaska” is going to keep me interested in what Don Merckle is all about. As a singer/songwriter, he doesn’t have a hard time distinguishing himself from the rest of the players in his crowded scene at the moment, and with this single, he makes it more than obvious to his listeners that sticking away from the pack isn’t just a concept for his career – it’s who he is as an artist. “Alaska” feels like a piece of a much greater puzzle, and it will only be in a complete studio album from this artist that we’re able to unlock that puzzle for everything it can truly offer.