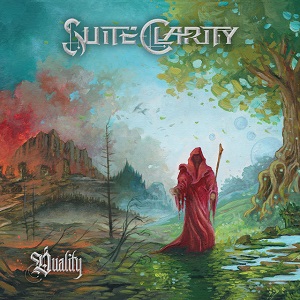 Metal doesn’t have to be filled with a lot of excesses to win the attention of hardcore fans, but when it’s progressively stylized and given a powerful nucleus, there’s no debating how full-bodied a sound this genre’s best players can produce. In their new record Duality, rockers Suite Clarity aren’t pulling any punches when it comes to virtuosity; where some would refuse to go above the minimalist model we’ve been seeing and hearing more and more of in the past few years, this is an act that lives for the opportunity to flex some real muscle with their melodies – and Duality is the place to do it.

“New Beginnings” and “Passing Storm” should be marketed as a pair no matter when and where they’re being consumed, and I think they couldn’t have set the tone for this record any better than they did. In the build-up to “The Undaunted,” we get a looseness that is soon eliminated in favor of rigid grooves for the duration of this record, which doesn’t make Duality feel clunky; on the contrary, this is an LP that has a lot more layers to it than the majority of metal albums I’ve listened to in the past year have.

“I, Immortal” and “The Will of Change” flirt with some pretty heady industrial influences that at first seem a little out of place next to the textural wallop of “Voices Unheard” or “Faded Light,” but once again, it’s not about consistency in Duality, but instead, a sense of danger that seems to await us everywhere we listen in this tracklist. While I dig the thrashing riff of “The Hero Within,” this isn’t a band that needs a lot of volatility in order to get our hearts pumping – especially in terms of what they can do with some surprisingly strong hooks here.

The bottom only gets tougher as we sink into “Destiny Falls: I” and its sequel “The Ethereal: II,” but it’s clear that Suite Clarity has a lot more on their minds than simply crushing us with bass and drum intensity. The intricacies within the lyrical narrative at the album’s conclusion are enough to make anyone want to go back through Duality for a second and third listen, but as a critic, I was all the more enthralled by the ways that the sentiments in these verses could be interpreted depending on where the listener is coming from in the first place.

“Enigma Rises: III” brings everything back to where we started with the progressive opening cut, but it doesn’t feel like an ultimate conclusion to the story that’s just starting to unfold in this album. I’ve been hearing a lot of lackluster content from the metal underground in the past year, but Duality is an LP that stands on its own and advertises more than a simple revisiting afforded to themes Slayer or Black Sabbath covered so many decades ago. From what I can tell, Suite Clarity has something personal they’re getting after with this vehicle, and I’m going to be curious to see how their efforts shake out over the next couple of years.