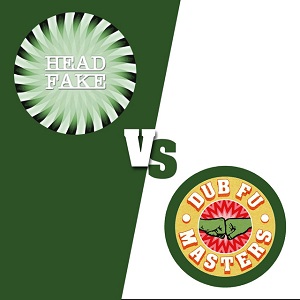 Furious adrenaline in the form of a bass and drum dynamic. A stoic synth melody in the foreground, a sense of danger hanging over the back. In Dub Fu Masters and Head Fake’s “One Step,” there’s no telling what sort of ominous creatures are lurking around in the darkness surrounding the beat, but if you’ve got the tenacity to press forward, this track and the entirety of Head Fake Vs Dub Fu Masters is more than worth your time this month. The beat would be clubby were it not outfitted with as postmodern a finish as it is via the melodies here, but from where I sit, this was a deliberate feature on the part of the creators.

“One Step” feels like a stripped-down, bleached version of EDM that swings much harder than it grinds, but if you’ve grown sick of the black and white noise that has been coming down the pipes in electronica lately, it’s going to feel like the breath of fresh air it was intended to embody. Head Fake Vs Dub Fu Masters gets harrier later on in “Overjoyed,” but I think it’s important to note that the structure of this opening cut is essentially what all three of the songs are made of, and not in a robotic, predictable way.

If there’s one way to sell me a record like this one, it’s to build on a basic theme and elaborate only when it serves the narrative you’re trying to construct. This is where “Overjoyed” is such a unique specimen that these two acts’ contemporaries could learn something from; while it’s got a generic foundation, it doesn’t sound like a template, but instead something that’s simplified. All in all, it’s a sleek electronic offering no beat lover could resist. It’s complicated and cut and dry at the same time, which is difficult to pull off no matter how much experience you’ve got in this game.

“Trump Funk” is the biggest streaming hit on Head Fake Vs Dub Fu Masters, and not just because of its old school vibes. There’s an almost vapory kind of feel to its bottom-end that bleeds into every other aspect of the mix and makes the tonal elements in the music so much stonier and cerebral. There’s a lot of thought going into making this as psychologically riveting a piece as possible, but it doesn’t sound weighted by an overambitious design at all (the opposite, really).

I’ve been spending the better part of the last week with this extended play, and what I think is it’s got an underground flair that makes it feel almost revolutionary besides some of the other material that’s been flying around in the headlines recently. Head Fake Vs Dub Fu Masters is a perfect amalgamation of everything these two acts appear to be about, and if it’s laying the groundwork for something even bigger and better to come about, electronic music buffs around the world are going to have a lot to be excited about in the future.