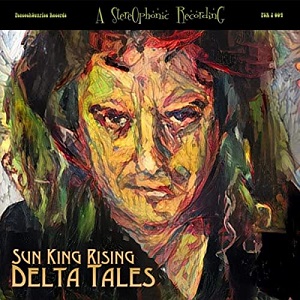 Sun King Rising isn’t a band in the traditional sense of the term, but you discover it doesn’t matter seconds into Sun King Rising’s first album release Delta Tales. Singer/songwriter/musician John Blangero’s desire to issue this work under a moniker likely reflects, at least in part, his musical background. He came of age in an era where ensemble acts dominated the artistic landscape rather than the plethora of solo performers reigning over music today.

It doesn’t feel like a glorified solo album, however. He fleshes out the ten compositions included on the release with a consistent supporting cast and their steadiness deepens the collection’s coherence. Many positive qualities stand out on Delta Tales and one of its greatest merits is its unity; the songs and musicians complement one another and there’s little if any dissonance detectable in its presentation.

Its sense of place sets it apart as well. Delta Tales opens with a bit of throwback as Sun King Rising delves deep into R&B’s past covering a relatively obscure late 60’s hit entitled “The Snake”. Blangero’s voice has the necessary rugged physicality to wrestle and pin down a song such as this and sweetening his singing with sparkling backing vocals. It’s a first-rate vocal from Blangero and great fun to hear him deliver the words with such relish. Sun King Rising dresses “The Snake” up in a funkified arrangement but even a cursory listen reveals far more than a compelling rhythm track and/or beat.

“Milkweed and Thistle” only has scattered splashes of the regionalism defining the release. There are several outstanding elements setting this track apart from the pack, but Blangero’s piano playing deserves its due. He varies between straight-ahead passages woven into the song’s fabric and colorful fills along the way with a much more improvisational air. There isn’t a moment on this album that sounds rehearsed and this track embodies that feeling of off-the-cuff creativity better than others.

“Free Will in China Blue” embraces his love for melody and, like many songs on this release, revolves around his piano playing. The lush instrumentation “conceals” the straight-forward quality powering the cut and features several tropes of the genre. It never feels cliched, however, as Blangero stamps his personality on each second of the performance. Another quality exerting an across the board effect on the songs is Sun King Rising’s penchant for the cinematic. “Beneath the Southern Sun”, like its predecessors, occupies a large stage without ever sounding bloated and strained. The guitar and piano are highlights of this song and put emphatic exclamation points in the performance.

“Evangeline in the Morning” is a sweeping piano ballad reinforced with light orchestration and supporting vocals. It’s a song with lyrical hard edges, the desperation rife throughout its lyrics cuts deep into listeners, but the stately accompaniment smooths over its unpalpable emotions and helps fill the performance with an unpretentious poetic glow. Sun King Rising closes Delta Tales with the upbeat and cleansing onrush “Let There Be Light” provides. It isn’t difficult to hear many of these songs and, noting their musical undercurrents, identify Blangero’s piano as their likely chief building block. There’s good reason for that. He has a strong melodic sense and plays with percussive strength underscoring each song’s fierce heartbeat.

Sun King Rising’s Delta Tales wears its emotions on its sleeve. John Blangero will be assembling a stable lineup for live shows but, no matter what, the songs on this album constitute one of the most impassioned and personal releases in recent memory. It deserves the widest possible audience.