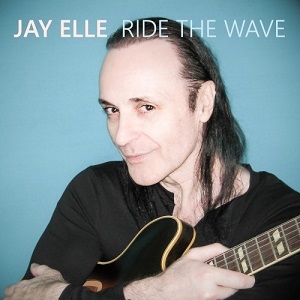 A folk-rock harmony is waiting to come alive with passionate indie sizzle in the title track of Jay Elle’s new album Ride the Wave, but if you think for a second that the acclaimed singer and songwriter is limiting the potent output in this record to the first and titular tune alone, you’re in for quite the surprise in the eleven songs that soon follow. From the namesake piece, he shifts gears into “Tequila Kiss” fiercely, allowing for the exotic components of the music to play out smoothly rather than choppy. “Want Me Bad” comes next with a staggering step that resembles an angry drunk lurching forward ever so aggressively, but as outlandish as the instruments are, Elle himself is a picture of stability at the microphone.

“Miss Mess” picks up with the same brawn “Want Me Bad” is made of but with a distinctly pop-centric hook. “Rainy Day” has one of the more streamlined melodies of any song here, and yet I think that it’s also one of the more emotionally charged as well. It’s impossible to equate efficiency with the pen to a conservative passion in this performance, and once you take a look at most any of the songs in the tracklist of Ride the Wave, I think you’re going to understand what I’m talking about. Elle is a no-fat player, but his music does not have to be devoid of any color just to be to the point and without the fluff so many of the records I review contain.

“Insane” and “Better Luck Next Time” feel like each other’s B-sides, but their aesthetical kinship isn’t the result of a repetitive model being utilized by Jay Elle himself in this record. “Angeling” has the same melodic profile but with an acoustic backdrop rather than anything electrified, and save for the angelic “She’s So Fine,” I think it could be the best-arranged work on the second half of the album. Nothing here actually lags or sounds like it doesn’t belong, but I can tell that Elle was going through a lot of different emotions when he was writing this just because of how much he’s able to get to lyrically in songs previously mentioned.

“Morning Rain” has an almost theatrical quality to its intro that only gets bigger and more progressive as we go on, but I don’t think it overshadows the subtle grandiosity of the vocal-focused “Twelve on Sunday.” We come to the end of the line in Ride the Wave with the acoustic “Who’s Camille,” but its haunting harmonies only prove to me that this is an artist who belongs on stage in front of a roaring audience who need the right voice to comfort them this summer. There’s just no other way for me to put this – Jay Elle has a divine voice and a pretty fun way of telling tales even when they’re riddled with a lot of real-world pain, and if you aren’t listening to his new album Ride the Wave right now, you don’t know what you’re missing.