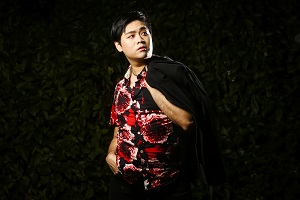 Hi sora, thanks for speaking with us today. To start, maybe you can tell our readers some of your backstory.

Of course, thank you so much for having me here! To those of y’all reading, hi! My name is sora, and I’m an up-and-coming pop musician born in Taiwan but raised and in New Orleans. I’ve been singing for literally all my entire life, beginning with choirs and musical theatre in elementary school all throughout high school, and then branching out to classical vocal performance studies in college. But from the beginning my heart was always with pop music. I say that my music career’s ‘birthdate’ is November 1st, 2011, because that was when I wrote my first single in one night, and I released Hello, November, the following April. Since then, I’ve released two EPs (The Insomniac EP: Sleepless Nights on Illuminated Roads and EP gloire) and my first full-length album (PARAMOUNT), and most recently have embarked on my latest musical project, VOL.24.

So your new single, Over, comes out on August 20th! Tell us a little about this song.

I’d love to! So Over is the third single from VOL.24, and it’s the perfect August release. Lyrically it takes the word “over” and plays with it; we start off in the song being over our previous lover, but after our paths cross again, the feelings wash over and we fall over for them. Underneath that there’s this really lush tropical house-pop production that I’m extra proud of, because it’s the first song that I sound designed and produced myself (with some extra help from my friend Elliot Lakefield on the mixing, much love to you!). The song gives this beautiful sunset vibe, which is why I wanted the lyrics video to reflect that too, so I worked closely with the amazing Nadia Dar to make sure that the vision comes to life in the most magical way. Basically, this is the perfect end-of-the-summer sadboi trop bop to blast on the radio while driving alongside the beach.

What do you think sets you apart from other artists?

I never really strive to set myself apart from other artists. I’ve always just wanted to be and to do. Music was one of my first passions and still is, and all I wanted to do was have fun and be myself. That being said, a lot of what makes sora tick has to do with how I like to tackle the creative process. I draw a lot of inspiration from Asian pop music, having had a formative phase in my life where I exclusively listened to only Japanese pop music from middle school until around high school 2008 (thanks, Gaga), and then being introduced to Korean pop music in 2010. Taking that idea of creating a full experience with every package, sonically and visually, I also put a lot of heart into the music. I write all of my songs myself and work very closely with the producers, co-writers, choreographers, and cameraperson to make sure that the finished product is exactly how I want it to be. Finally, especially as someone who is Taiwanese and queer, I never really grew up with that kind of visibility and representation within popular media, so I aim to bring that energy to the forefront of everything I do.

Can you tell us about some obstacles you’ve had to overcome so far?

Two main obstacles: doing everything myself, and time. Doing everything myself means I have a lot of freedom to pull off whatever I want. But on the flip side, having to be the one to manage and juggle literally every single part of the process is hard. Scheduling a music video shoot with multiple parties involved, making sure deadlines are met, etc. When I was just starting out and couldn’t really afford to have a team handle any of it, it felt like all of my energy was put into my work. Sometimes it felt like I was the only one that could do it, that had to do it, and because of that it got overwhelming at times.

Aside from just generally feeling like there is never enough time in a day to get everything done and also enough rest afterwards, there was also always this lingering sense of fighting time in the long run. Growing up listening to so much music and so many pop artists that I looked up to, I always had big dreams of grandeur, imagining that I would debut in Japan as a J-Pop act and how my debut album would go (literally coming up with album and song titles before even writing the songs themselves haha) or making it far on American Idol and where my worldwide tour would take me, but as time went on, none of those fantasies came to fruition, and there were times where I did doubt myself and consider maybe stopping my pop dreams and pursuing something else. But one lesson I’ve really come to body, especially during this past year, is that time is merely a social construct, and that everyone’s journeys are different. I truly do believe, with every fiber of my being, that I’ll get there eventually, so long as I keep working hard and don’t give up.

We appreciate you sharing with us. So what else can our readers expect from you coming up?

So what sets VOL.24 apart from my previous releases is it’s not a full album, but rather a single a month. I started off this past June with Dance Single, and in July I released So Long As I Got You. In fact, I already have my tentative schedule packed all the way through next July. I know that Over isn’t out yet, but I guess I can share some small spoilers for the September single. It’s gonna be super very dramatic and explosive, and it’s also going to be the first song in my discography to include a feature from not one but two of my dearest friends. Also, we’re working hard on the choreography, and it’s going to be soooo high energy.

Exciting stuff, how can our readers support you going forward?

Make sure to check out the previous and upcoming VOL.24 singles on all streaming sites, and if you like merch, you can also buy the special limited merch item that I’m also releasing for each single via Bandcamp! Each song has a different special piece, only available for preorder, so you def want to make sure you get yours before they’re gone forever. Also, follow me on social media, @soracalling on Facebook, Twitter, Instagram, and TikTok! I’d love to connect and chat with y’all. See you soon!