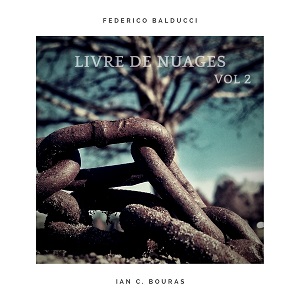 The second release from the experimental/ambient duo Book of Clouds, Heavy Chains, is a challenging but rewarding music listening experience. The six songs included on this release are taken from live performances with Federico Balducci on guitar and Ian Bouras providing evocative sound effects throughout. A third musician, sax player Ayumi Ishito, appears on the fourth track and contributes important variations to the release. Bouras is primarily known for his guitar playing, but he cedes that position in Book of Clouds to Balducci and the reasons are clear. Balducci studied jazz guitar at the Universidad Interamericana before honing his classical guitar skills at the University of Puerto Rico under the tutelage of greats such as Javier de la Torre and Juan Sorroce, among others. He further developed his jazz and arranging skills during a tenure at the renowned Berklee School of Music.

Challenges mark Bouras’ own path but he has overcome these obstacles. He deals with a progressive and rare neurological disease called Ataxia and its presence in his life forced him to move from a more conventional musical path into new and previously uncharted, for him, territory. His presence is strong on the release’s first track “Prelude”. This brief piece, lasting well under a minute, doesn’t appear to feature Balducci at all. Instead, Bouras employs a disjointed array of sound effects listeners are certain to hear as quite alien but he, nonetheless, crafts a distinctive opening for the release.

“Primer Eslabon”, the second track, opens with echo-laden guitar and a dream-like mood Bouras augments at key moments with his own work. His contributions to the performance are uniformly understated and the compositional delicacy he shares with Balducci throughout this performance is emblematic of the release as a whole. It also the first track revealing their penchant for extended songwriting clocking in at over twelve minutes in lengths – despite such an extended performance, however, it is never exhausts the listener’s patience. The third track “Segundo Eslabon” opens initially on a near ominous note before Balducci enters the frame with lyrical guitar improvisations. This is another long piece, over sixteen minutes long, and the duo’s willingness to explore such expansive sonic landscapes distinguishes them from “safer” musical units. Such performances, in lesser hands, can strike listeners as self indulgent, but that’s never the case here.

“Tercer Eslabon” introduces Avumi Ishito’s aforementioned contributions to the release and his slightly mournful, yet meandering, sax lines bring a new flavor to the performance. This is shorter than the preceding track and there’s a certainly a little more traditional focus than we hear on earlier efforts, but the same willingness to explore boundaries remains strong with this track. The longest track on Heavy Chains comes with the next performance, “Cuarto Eslabon”, and the Balducci’s guitar meditations reach their zenith with this performance. Occasional voices can be heard deep in the mix, unsurprising considering this recording is live, and the overall mood of the music has a near spectral nature. Book of Clouds’ Heavy Chains challenges listeners in unaccustomed ways, but open-minded music fans will welcome it for that very reason.