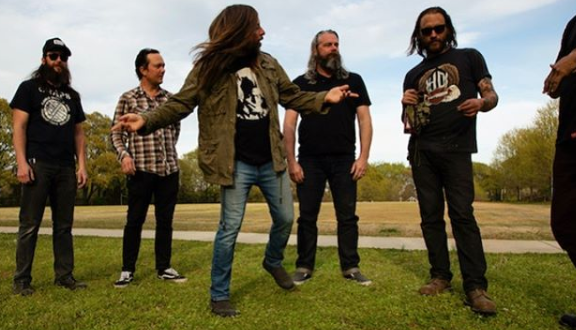 Holy Beach – All That Matters Is This Matter

Bulldozer riffing powers the opening track for Holy Beach’s full length debut All That Matters is This Matter. The churning trajectory of “Ships Off the Coast” pummels listeners without fail and the vocals maintain a balance between outright lung-busting screams and finessed contributions. There are atmospheric shifts in the song’s dynamics they never over-extend that prevents the song from collapsing into an unimaginative one note attack. It’s an ideal way for the band to kick off the album – it announces their physicality in an unmistakable fashion but, likewise, demonstrates a level of intelligence characterizes the recording as a whole. There is no question that Atlanta based Holy Beach comes out of their corner swinging.

The songs aren’t wild aural haymakers however. There’s a definite design to the songwriting on Holy Beach’s debut reflecting the hours and years vocalist and guitarist John Lally invests in refining his artistic vision. It is rare for new bands to emerge with such a complete musical identity. Dissonant fuzz opens the brief second track “Fade Away” but listeners can discern clear orchestration and shape beneath the sonic murk. It segues well into the third number “It’s the Fear”, but the band adopts a less aggressive attitude with this track. The vocals are less distinct as well, but the crashing power and heavy distortion of the band nevertheless generates crackling energy. If the track has any flaws, it is the lack of variation we hear in the opener.

“Confident Prick” has a delightful title and the musical firepower to back up its aggressive implications. Lally’s ferocious scream throughout the verses undergoes periodic shifting of gears near a handful of dramatic breaks in the arrangement. Each time listeners hit those short breaks the band returns to the fray even more explosive than before. The band’s wall of guitars makes the glacial pace of “International Graves” an imposing listening experience while never sacrificing its musicality. Lally’s vocals come in after an extended instrumental prelude and the second half of the song has some deft tempo changes enhancing the track’s power. Jordan Hershaft’s drumming is crucial to this number’s success.

The initial brittle flourish of guitar kicking off “The New Colossus” returns for a few seconds later in the track, but the bulk of the song boasts thick riffing crawling towards an inevitable conclusion. Some will balk at how often the band’s vocals approach a drone-like quality, the band’s shoegaze influences coming through, but it will satisfy Holy Beach’s target audience. The album finale, “Skull Faced on a Horse”, spikes the tempo for an emphatic closer. They revisit the churning riffing distinguishing the first song and mix it with a Lally vocal the band’s three prong guitar attack obscures. Some tracks score glancing blows on listeners rather than direct hits, but All That Matters Is This Matter bristles with force and passion. It is a full length debut announcing the arrival of a formidable rock act in an indie scene needing this sort of crunch and top shelf songwriting.