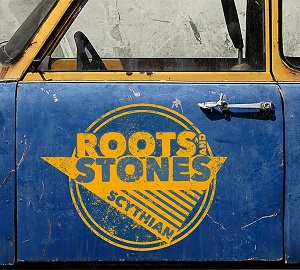 Rustling up a feverish groove out of the dead silence like a second coming we didn’t even know we were supposed to prepare for, Scythian hit the ground running in their new album Roots & Stones with the potent “Broken String” before quickly galloping into “Sail Away Johnny,” a striking declaration of their current sound and style of play inside of a four minute acoustic jam. Plowing through the darkness like the fate of the world depends on their performance, Scythian get back to the basics of their old school folk-rock experimentations in Roots & Stones, and from the fierce “Duffy’s Cut’ to the pop-friendly fire-starter “Fire In My Heart,” they remind us just how long they’ve been in this business – while killing it the whole time.

“The Motherland” submits an obvious batch of gypsy punk that fits in marvelously between the radio-ready “Fire in My Heart” and Shane Hayes-featured “Galway City,” but if you’re looking for melodic calisthenics, “Je Suis Coureur Des Bois” is what you want to get to in this tracklist. This is easily the lushest piece of material on the record, but far from the only reason why I would rank Roots & Stones among the most enthralling indie LPs I’ve listened to in the month of December. In “Je Suis Coureur Des Bois,” Scythian start to sound like true vets – they’re older and wiser than before, but more importantly, they’re armed with a desire to be heard unlike anything I could have anticipated.

“Men of the North” scales back the intensity for a second, but only ahead of the tidal wave of tonal luxuries that come with the strumming “Sweet Maryanne.” “Sweet Maryanne” flirts with a tune that sounds an awful lot like a vintage Decemberists, but it eventually unravels into something far more eclectic than that act ever produced in their heyday. “The Bruce” and “The Fight” are essentially two sides of the same compositional coin, but beside the powerhouse performance Catie Parker Fedoryka puts on with the band in “Virginia,” they’re not quite as exciting. Fedoryka’s pairing with Scythian is one of the more provocative moments on the album, and if it winds up being the last occasion on which they collaborate together, I think it would be a real shame indeed.

Concluding with the bright harmonies of “Best Friend Song,” my favorite track on the LP, Scythian’s Roots & Stones doesn’t overstay its welcome but, in fact, does the exact opposite. While it feels a little shorter than it should, this is an album that is jam-packed with more content than you’re expecting, and if you ask me it’s unquestionably one of the best records this band could have hoped to release in 2020. This year was essentially a throwaway for a lot of acts given the situation with live performances, but if there’s one group that took advantage of the opportunity to buckle and down and focus on the things that really matter when making a music career, it’s Scythian.

User Rating: Be the first one !
Share
Previous “Christmas Time For Everyone” (SINGLE) by More Than Words
Next Moon Fever – “Cocaine” (SINGLE)