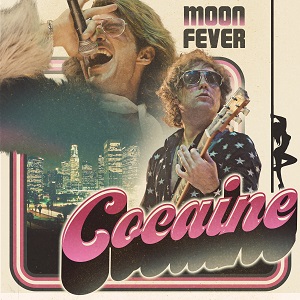 Hollywood rockers Moon Fever’s new single “Cocaine” demonstrates all the attributes thus far fueling the guitar-driven outfit’s bid for popular and critical notice. Tracks such as this are a throwback to an earlier time in rock history. It isn’t glorifying substance abuse to say songs about drug use, from marijuana to cocaine to alcohol, are rife throughout rock’s songwriting tradition. Moon Fever are more than talented rock players; they are students of the genre as well. It isn’t an academic exercise, however, as Moon Fever covers the song’s subject in a convincing way without ever succumbing to cliché.

The video they included with the release is a polished work in every sense of the word. Instead of opting for the typical performance clip, Moon Fever bookend the promotional clip with a narrative of the band showing up for a gig at a remote dive bar and winning over a small but initially skeptical audience. It’s a simple premise but nevertheless effective. The “look” of this footage is thoroughly professional – there’s no Super 8 camera quality work marring the video. The band does a good job conveying the necessary amount of charisma to make the viewing experience more memorable. It isn’t groundbreaking, but it is quite solid.

Vocalist Cody Jasper has commanding pipes with enough blues oomph in his phrasing to envelop these lyrics in a hard-boiled rough and tumble sound and complements Moon Fever’s twin guitar punch. Six stringer slingers Mitch Micoley and Joe Perez pack ample wallop with their terse rhythm playing, jagged riffing, and the occasional flourish of lead guitar erupting from the arrangement. There’s nothing they don’t do for this track. The engine room of drummer Greg Garcia and bass player Gabe Maska lay down a muscular but unobtrusive bottom end that gives Perez and Micoley plenty of chances to weave musical magic.

The lyrics are terse as well. If you read them off a sheet or screen they would strike one as a fairly ordinary catalog of images with obvious connections and suggestiveness, but Jasper turns them into an outlaw’s vow. They sound “lived in” rather than posed and practically bleed attitude without ever sounding heavy-handed or hackneyed. It’s harder than it sounds. Moon Fever can embrace the lowest common denominator for a song such as this, but they choose to take a different direction instead and produce an idiosyncratic expression of their experiences and observations. It’s pure high octane rock ‘n’ roll.

It goes back further than the Sunset Strip scene of the mid-late 1980’s. You can hear amped up echoes of The Rolling Stones at their gritty best running through their music and Moon Fever, without question, is closer in spirit to bands such as Guns ‘n’ Roses or maybe Faster Pussycat than other bands from that time period and scene like Poison. “Cocaine” has a hard-hitting chorus and image driven verses you won’t soon forget and the music more than holds up its end of the bargain. The vocals top everything off with an emphatic exclamation point. Even if Moon Fever’s music isn’t your cup of tea, it’s impossible to deny them.