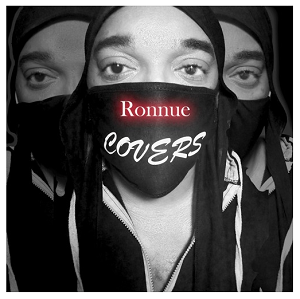 Kicking and screaming its way out of the silence and into the spotlight, we find Ronnue’s rendition of the iconic “Sex Shooter” almost bursting at the seams with a hearty synth melody before we even know what to do with it. Set to a swaggering tempo that picks up the grind of its original incarnation and twists it into something a little more suited for Ronnue’s unique style of play, “Sex Shooter” is the perfect song to get the new album Covers in motion, and as it spills into the withheld beat of “Fire,” it quickly becomes clear that this is not your mom and dad’s cover album. Covers is too epic a listen for this to be the case, and it has a way of getting our attention right off the top no matter how many times you’ve heard it – or the source material – before.

“Being With You” brings Lisa G. Allen into the studio for a marvelous sonic tryst with Ronnue that gets a second life later on in the concluding track “What Can I Do For You,” and I personally think these two songs are reason enough to pick up a copy of this record before the season is over. There’s a warmth to their chemistry inside of the booth that isn’t something you can come across just any old day in the pop music genre, and if provided the time and space to do as much, I haven’t any doubts as to whether or not they could create an entire album full of provocative listens like these.

When I first say “I Can’t Tell You Why” in this tracklist, I got chills. Introduction 2 Retro-Funk featured some very soulful lead vocals, and to some degree many of them reminded me of the classic harmonies featured in this song’s original version; much to my surprise, however, Ronnue whips out an entirely different skillset for this particular performance in Covers. He’s so soft and vulnerable it’s almost as though he could be crushed by the pulsating drumbeat in the backdrop; his kinship with the melody is undeniable, while his delivery is, in a word, captivating. His reworking of “That’s the Way Love Goes” is equally unique, but between the two, I think “I Can’t Tell You Why” needs to be considered the most elite solo performance on the LP.

While I expected some of the grooves in “She’s Always in My Hair” with this latest release from Ronnue, I definitely did not expect to find the larger than life melodic trappings they’re accompanied by in tracks like this one, “Fire,” and every other song on Covers. The approach, if you’re a fan of his music, is nothing new, but the energy is absolutely refreshed and focused in a fashion that fits the theme of 2020 breathtakingly well. Though Covers is, well, a cover album, it’s absolutely an essential piece of Ronnue’s discography, and to all of those who still haven’t heard his work (somehow), I’d recommend picking it up immediately.