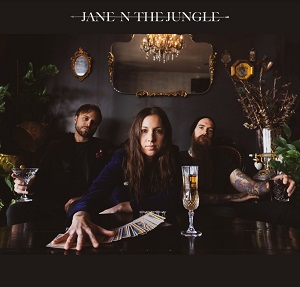 Jane n’ the Jungle have released some of their best work so far this year, and to cap things off they’re dropping another incendiary track and music video in “Lucky 7” that you’d be foolish to miss out on this December. “Lucky 7” doesn’t shift the artistic trajectory from what its predecessors had projected but instead reinforces a couple of key themes within Jane n’ the Jungle’s identity, starting with their keen attention to detail. This band isn’t following some mainstream path to stardom – in this single, they remind the world that the American underground is where they plan on calling home.

The guitars here frequently feel like the true star of the show with everything else in the track being designed around their strut, but this isn’t to discount the presence of the vocal nor the percussion and bassline at all. It’s actually kind of refreshing to find a rock band that is putting as much of the spotlight on riffing as any of their iconic influences might have just a couple of decades ago, and where some might find it to be old school I look at it as building upon a concept that too many groups abandoned (for all the wrong reasons, I might add).

This lead vocal has a lot more grit than you’re expecting it to produce at the start of the song, but when necessary it can turn in a bright melodicism to spice up the chorus and bring home the hook in one piece. It takes a lot of discipline to be able to compete with the sizeable instrumental fabric of a song like this one, but at no point do we find the frontwoman here sounding even slightly hesitant or unsure of her spot in the mix. A lot of her counterparts on the indie circuit could learn a thing or two from her approach to this piece, and I doubt I’ll be the only listener to make this observation.

The music video for “Lucky 7” is barebones much like its pop contemporaries made in 2020 have consistently been, but the energy that its players create from one frame to the next makes it a cut above the rest without question. This isn’t your standard COVID-style video featuring musicians cutting a track from across a Zoom call; we’re inside the studio and feeling the insularity of the recording process, which both feeds into the cultural theme of the year as well as a classic rock concept perhaps best exemplified in Metallica’s video for “Nothing Else Matters.”

Hard rock fiends have been buzzing about Jane n’ the Jungle throughout the better part of the last year, and if you’ve been wondering what all of the fuss is about, I recommend taking a peek at “Lucky 7” for some immediate understanding. “Lucky 7” hits fast, hard and uncompromisingly, and if it’s the tone-setter for what 2021 is going to sound like for this band, you can bet everything on my sticking around for more.

Share
Previous Little is Much” (SINGLE) by Terri Bannister
Next Tolu. A – “My Talents” (SINGLE)