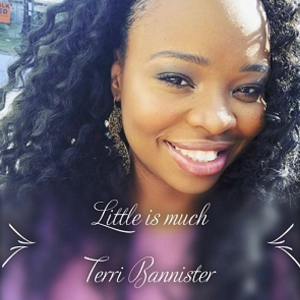 Little is Much” (SINGLE) by Terri Bannister

“Little is much when God is in it / He multiplies and He restores,” sings Terri Bannister in her rookie single “Little is Much,” currently out this winter and making quite the splash among gospel fans everywhere. In this climactic pair of lines taken from the song’s chorus, we find Bannister at her most exposed both melodically and lyrically, with her essence tying everything together in the track whether sourced from her or another player in the mix. She’s a force to be reckoned with, and whether you’ve heard her work before or not, this is a performance that is almost guaranteed to get a strong reaction out of you.

Bannister’s vocal is so forward and reassuring here, but it never feels this way on account of some sort of synthesized backing, or even that of the organic elements in her band. This is all her from the get-go, and while the smooth crooning she applies to the lead-up to the chorus is something that could move a mountain at the right volume, her control of the hook in this track has literally brought me to tears while listening to it. She’s got so much power but she’s being smart with it and avoiding every temptation to overindulge.

The music video for “Little is Much” features a colorful layout that is perhaps the best encapsulation of the energy behind the narrative outside of the lyrics themselves. I like that we’re being presented with a cinematic story, and yet it isn’t drifting too far away from the theme of the song as it’s offered to begin with (which is a lot more common a problem as you might expect). The symbolism is breathtakingly emotional and spot-on bold where it counts the most, but even more importantly it puts nothing artificial between us and the artist herself.

The melodic instrumentation in the backdrop literally crushes the percussive element in a couple of different instances here, but I think this was somewhat necessary for the vocal harmony in the center of the song to remain the biggest agent of evocation in the mix. We’ve already got enough of a groove growing out of the cadence of the verses; I just don’t see a need for any more of a spotlight on the drums than they were already given in this recording, especially given just how much moxie Bannister is putting into every one of these verses.

If you like progressive gospel music that doesn’t ignore the fundamentals of pop songwriting, Terri Bannister’s “Little is Much” is a song and music video you really need to check out as soon as you can. You might find that it was the one finishing touch missing from your holiday season playlist, but at any rate it’s the sort of single capable of raising the profile of its creator in a way that is absolutely justified. She’s still a young rookie, but I cannot wait to hear what she’s going to come up with inside of the studio for her next release.