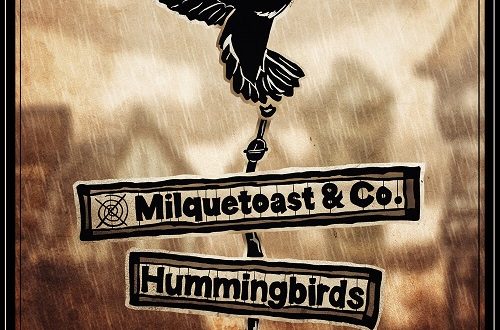 Echoing the unforgiving backdrop of their present home in the American west, Milquetoast and Co. hold absolutely nothing back from us in their new single and music video “Hummingbirds,” which was released this year and is currently available everywhere premium indie music is sold and streamed. There’s nothing fake or disingenuous about the passion we find in between the strings and delicate vocal harmonies in this piece – from the moment we enter the first stanza forward, both the melodic tone and the poetic trajectory make clear to us how real the emotion is in this piece, with essentially nothing entering the fold that wasn’t intended to influence the narrative.

The string section is extremely prominent in the master mix, but there’s not much in this track that is strong enough to get in the way of the lead vocal when it’s unveiling lyrics from the eye of the storm. Although it’s presented to us at a volume that occasionally resembles a lover’s whisper, there’s scarcely an instance in which the crooning doesn’t sound penetrative and capable of asserting the theme of a verse through little more than the tone of the singer’s voice. It’s not in-your-face physical, but it’s a very immersive element here just the same.

I’ve never been much for non-live action music videos, but the way the visual counterpart to the single version of “Hummingbirds” was made doesn’t make it very easy for me to dismiss its contents at all. The illustrations here make the imagery surreally human and affective to the point of being rather tragic when paired with the minor key melodies in the backdrop. It’s even more powerful than it would have been with real people trying to capture the same kind of a concept, and it’s definitely made me ready to hear another full-length album from Milquetoast and Co. sometime soon (as they’re obviously capable of producing one).

There are different ways that the lyrics in this track can be interpreted, but from where I sit I think the way they’re structured against the grain of the beat is as critical to understanding their deeper meaning as any of their actual statements are. Milquetoast and Co. have always been an act that conveys not only through words but via the fabric of melodicism that these words sit atop in any given song, and in this performance I think they’re exhibiting the most elaborate artistic web-weaving they’ve ever put onto tape.

If you had big expectations for the new Milquetoast and Co. single much as I did, I can assure you that the substance and design of “Hummingbirds” will not be a letdown this holiday season. The snow might be falling and the nightly news could be just as icy and unforgivingly grim as the world outside looks, but in this single and its music video you’re certain to discover a white-hot artistic skill that has been getting progressively more intriguing in the eleven years since Drinking and Smoking Too Much with Women I Hate debuted.

User Rating: Be the first one !
Share
Previous Lucky Harmon – “Party Life” (SINGLE)
Next Little is Much” (SINGLE) by Terri Bannister