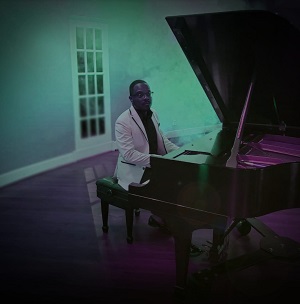 It’s been a big year for inspirational music around the world, and although he only released his very first EP in 2020, Tolu. A is definitely among those to have contributed to a much-needed soundtrack of optimism. In his new single “My Talents,” he introduces us to a fluid jazz style of piano that takes all of the tension out of the equation before it ever has the chance to impact the mood of the music. There’s an indulgence to the decadent stylization of this piece, but in a year like this one, who could pass it up?

The piano roars with passion from start to finish in this performance, but I don’t think that it occupies too much of the mix at all. On the contrary, there’s a fair balance between the keys, the percussion and the wind parts in the song that suggests a collaborative chemistry as being the main source for chills here. There’s no denying that the players are able to connect with one another in this harmony rather seamlessly, but at no point do any of their individual parts become lost in the haze of a melodic windstorm (mostly thanks to the definition of the mix).

One of my favorite elements in this single is its sax part, which essentially puts an exclamation point on a couple of different angles to the narrative here. Just when we think the keys and percussion couldn’t possibly grind out any more of a positive vibe, the sax peppers their cadence with a bit of broken rhythm and raw color that immediately makes everything in the song all the more heartwarming. It’s something that made me fall in love with the track right out of the gate, and definitely the proper way for a greenhorn like Tolu. A to use a collaborative adornment.

The music video for “My Talents” feels really conceptual, but it’s worth noting that there’s really nothing specifically excessive or outside of the box comprising its imagery. To be perfectly honest, it’s really the vitality of the players on screen – Tolu. A among them – that makes this piece feel a little artsy and avant-garde by design, even though none of the actual components of the visual or aural experience here could be described as alternative to anything in the mainstream model. It’s the work of an indie artist, and that much is clear even from a distance.

You don’t need the linguistic definitions of a lead vocal to contextualize the meaning in a song as forward-thinking as “My Talents;” all it really requires is a player like Tolu. A at the helm of the project and the rest falls into place rather neatly. I was really taken aback by his work upon first getting a glimpse at this music video recently, and if it’s giving us a preview of what a full-length album might potentially look and sound like in the future then you can absolutely count on me following up on this review of his virgin work.