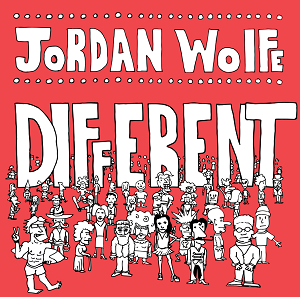 Compared to how it was just ten years ago, there’s just not the kind of emphasis on guitar in rock music as there used to be, but that isn’t preventing artists like Jordan Wolfe from using the six-string as a catalyst for charismatic songcraft this winter at all. Contrarily, Wolfe’s entire modus operandi in the new single “Different” starts and ends with his relationship he has with his guitar, and although he has plenty to contribute as a singer and, for that matter, one heck of a lean and mean songwriter, it’s the fretwork that makes this single a winner in my book.

Efficiency has been kind in pop music over the past couple of years, and while he isn’t necessarily going as far as his minimalistic peers have been lately, no one can accuse Jordan Wolfe of being overindulgent with any of the elements included in this track. He’s got a smart vocal that steers clear of the fuzz and destruction his rhythm section is producing, and though the guitars are large and in charge, they’re never the driving force controlling the tempo of the music. Separation matters in this genre, and in this specific arrangement it’s producing a genuine hit in “Different.”

There’s no self-righteous attitude to get past when listening to this song, but instead a lot of confidence that shreds through the mundanity of predictable melodicism without skipping a beat. I’m not saying that the bones of “Different” are lacking density at all, but it’s indisputable that had another player taken up the task of performing this track, I don’t think it would sound as emotive and effective as it does when Jordan Wolfe is playing it here. He’s got his own distinct style, and it’s a big part of what makes this song a really difficult piece to put down.

I love the balance between lyrics and instrumentation in “Different,” especially in how it doesn’t overstate the mood of the story being told with a lot of overthought linguistics. Poeticisms in rock have always been overrated, and without being straight-up to the degree of sounding emotionless, Wolfe has found a way to be cut and dry with his narrative in this single in a manner that his contemporaries in and out of the underground have struggled to keep up with (let alone match) in recent years. It’s a formula I’d stick with if I were him, and I doubt I’ll be the only critic to say so.

Rockers around the world have a real gem to appreciate in “Different” this winter season, and whether it’s been a minute since you fell in love with a great guitar part or not, this is the kind of track that is almost certain to bring out the headbanger in you by the time it comes to a conclusion. Jordan Wolfe is flying the rock n’ roll flag high and with pride in this release, and if there’s anything we can take away from its presence on record store shelves right now, it’s that this star in the making is only just beginning to blow our minds.