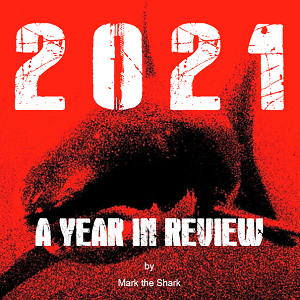 At the start of 2021, there was a lot of concern over what kind of a year it was going to be in music. 2020’s concert culture was crushed under the weight of a pandemic, and while much of the same persisted into this past year, this didn’t stop the underground from producing with even more vigor than initial forecasts had predicted. From the darkly insular Do Your Worst from God of Love to this year’s Album of the Year Award recipient The Well by Brielle Brown, indie players proved that the best in music really does live on the left side of the dial once more not through the presence of trends on stage or even on the radio, but via aesthetical influences that reached well outside the world of music alone.

Bard’s Flying Vessel released an incredible debut in I that we’re still talking about months after it initially hit record store shelves, but in terms of making the perfect sophomore album, I can’t say another act had my attention this year quite the way Meditative Animal did in their record Social Gravity. Rather than building off of the conventions outlined in their debut, this second album sees singer/songwriter Nick Mirisola going even further down the rabbit hole of boundless creativity and rivaling equally stunning efforts from The Color Forty Nine (String Ladder) and Nathan Germick (Goldenboy) rather epically.

Sharlamar Curry’s Dreams Never Die/ColdWave was the runaway indie R&B favorite around indie circles since it first came out this year, and taking just a peek at its tracklist should help you to understand why. Skewing lo-fi hip-hop themes with old-school R&B swing of the lightest variety is one thing, but Curry evolves an entire concept of post-funk melodicism inside of this tracklist (and sometimes even within the same song) like it’s second nature. You can’t argue with the kind of charisma on the table in a record like this one, and I was left enraptured by its quality stylization from the moment I pressed play forward.

Kemme’s Cyclorama and Sandy’s Sami & Sandy tied for second place behind The Well for Album of the Year in 2021, ironically for the same reason – their utilization of smart surrealism. In a year that featured everyone trying to get more cerebral than everyone else, these are two acts that have been able to simplify profound emotional expression and avant-garde notions behind and in front of the mixing board so well that they could be credited with making their own brand of outlandish alternative music a lot sooner than later. Where Kemme brings Joni Mitchell-esque pastoral qualities into the future with brooding harmonies that could double for diatribes with the right beat behind them, Sandy’s remixes the idea of surf rock and psychedelic postmodernity for a generation demanding something more intellectual on the FM dial, and I can’t wait to see what either of them release next. 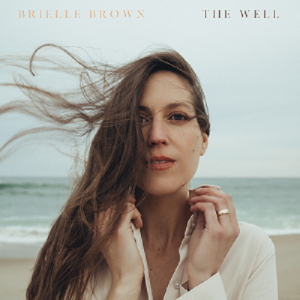 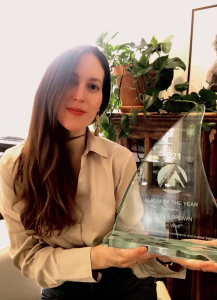 Which brings us to this year’s Album of the Year Award-winning piece in Brielle Brown’s The Well.  Although a mere twenty-four minutes long and technically an extended play, The Well was instantly a favorite for AOTY in 2021. Starting with the tonally poised “Concrete Stars,” Brown doesn’t hold back from giving us one of the most refined and charmingly harmony-centric performances in this record you’re likely to hear this year or anytime in the near future. Her presence is consistently the main attraction in the tracklist, which isn’t to say her instrumental arrangements don’t give us something desirable on their own. Contrarily, lofty concepts behind “Let the Water” and “Skylark’s Tune” suggest we’re listening to a player who isn’t satisfied straddling the simplistic rhythms that a lot of her contemporaries would be content to recycle a hundred different tims into just as many songs. She challenges herself in this record, pushing hooks along ever so slowly whilst acknowledging pressures from tempos and textures the same in her delivery, which is everything I want out of a vocal release like this one.

Brown’s eagerness to defy the modern pop model never translates as rebelliousness in the title track of The Well or even something more straightforward in attack like “She’s Come to Sing,” but instead comes to us in much subtler terms. The very fluidity of this set of songs speaks to her cohesiveness as an artist and someone who doesn’t need a lot of time, assistance, or experience to find her sound and what kind of aesthetics she wants to call her own. As she indicates so fearlessly in the unabashedly humble “This Time Around,” hers is a future defined not by circumstance but perseverance, which is why I’m hoping this is only the first of many incredible works she’s going to share with us.

Read my original review posted back in June 2021: https://indieshark.com/awards/pick-of-the-week/brielle-brown-the-well-lp/

It wouldn’t truly be a yearend cover story without throwing in a couple of honorable mentions for indie records like Chesca’s Feel the Breeze and Brandon Coleman’s Champagne, both of which hit the spot at their release dates and still have a lot to offer listeners who give them a spin in 2022. Overall, I think 2021 was quite the enriching year for both artists and audiences in the international underground as well as the mainstream, the latter of which saw quaking releases from hip-hop and country especially, and if there’s anything that we can predict about 2022 from the past twelve months of tenacious content coming out of the woodwork, it’s that experimentation is going to remain the order of the day. We’re living in the time of hybrid harmonies, and Brielle Brown’s The Well proved that as well as any of the other headline-making works you read about on INDIESHARK this year did.

Once again congratulations to Brielle Brown for having the courage to remain true to herself as a “total package” singer/songwriter/entertainer. #briellebrownalbumoftheyear

Perhaps the greatest lesson from 2021? It’s a good era to be an audiophile and an even better time to have a taste in independent beats.