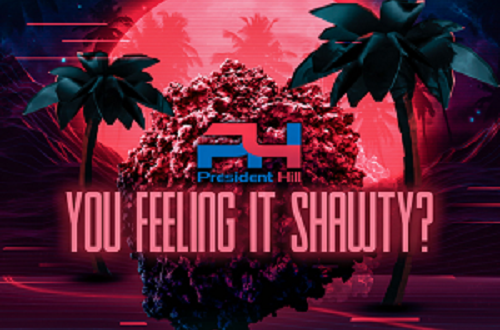 Hitting us with everything he has in the chamber right off the top, President Hill is clearly not messing around when he kicks out the opening bars in “You Feelin It Shawty,” his all-new single currently out and available everywhere quality hip-hop is sold and streamed. Although he’s got a pressurized percussive force beneath his lyrics, he’s the one owning the spotlight in this performance, and his control over the narrative only gets stronger as we press on. President Hill didn’t pick the easiest era to get into this industry, but for what he’s able to present the audience with in “You Feelin It Shawty,” there’s really no denying the potential he’s got as an artist in modern hip-hop. You can’t teach these skills, and he lets them carry every lyric in this single.

The beat here is a little wound up, but it doesn’t go unutilized in the grander scheme of things; if anything, I think its stifled angst contributes a lot of charisma to the song that wouldn’t have been in this performance otherwise. I think President Hill has a good feel for his own depth as a performer, and he’s able to work off of the groove in “You Feelin It Shawty” like his voice is an extension of the percussion. That’s not something that you find every day in this genre or any other at the moment, and it’s likely a big part of the reason why critics are as in love with this player as we are right now.

President Hill has a relaxed vocal style that could be a little harder than it is here if he needed it to be, but I like that he isn’t biting off more than he can chew at all. There’s nothing wrong with playing it safe when you’ve got as smooth a backdrop to straddle as he does in “You Feelin It Shawty,” and if I were in his position I probably would have gone the same route with this single. He doesn’t want to overstate anything, let alone his number one asset – his voice – and by choosing to go with a cut and dry route in this performance, he makes it easier for us to appreciate the abilities he has with a microphone in his hands.

Hip-hop is hard to break into, but with the charm I’m hearing in “You Feelin It Shawty,” I think it goes without saying that President Hill has a better shot at stardom than a lot of the other rappers trying to come up through the underground right now. He isn’t focusing on the predictable in this piece and, better yet, he doesn’t sound like someone obsessed with being “experimental” just for the sake of getting some love from a discriminating press. This is a pro track from a pro player that sounds like it could break open a new audience for him if promoted on college radio, and all things considered, I think it’s a great way to get introduced to who President Hill is and, more importantly, where he’s going.

The music of President Hill has been heard all over the world in partnership with the radio plugging services offered by Musik and Film Radio Promotions Division.  Learn more https://musikandfilm.com

User Rating: Be the first one !
Share
Previous 2021- A YEAR IN REVIEW
Next Streaking in Tongues “Christmas with Bigfoot” (LP)