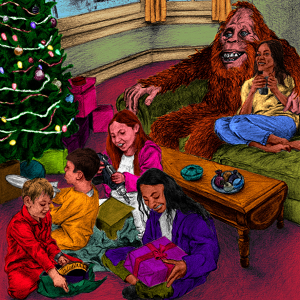 In an almost post-theatrical fashion, Streaking in Tongues usher us forth into a church of poetry ala “Bigfoot and Little Women” that will soon expand across five additional tracks in their collaborative LP with U.P. poet laureate Marty Achatz, and for as brawny a runtime as this opening cut has (over twenty-three minutes in total), it’s really just the beginning of what becomes a full-bodied adventure into the soul of its creators. In both the album and book versions of Christmas with Bigfoot, we aren’t given a choice but to venture along with Achatz as he ponders the universe, suffering, peace, and even COVID-era Christmases, but beside Streaking in Tongues, his words are even more potent in strength than they already would have been on their own.

“Bigfoot Noel” isn’t quite as ambitious as “Bigfoot and Little Women” is, but its atmospheric instrumental componentry is some of the most searing of the entire record. “Live Long and Prosper” is more experimental and a bit rigid in terms of Achatz’s delivery, but its Star Trek-inspired haikus seem to sit as well with the other content in this album as anything else does. There’s a strange flow to all of the tracks in Christmas with Bigfoot that is neither explainable nor unpleasant in any way, and I think it revolves solely around just how powerful a connection everyone recording together here really has. This is professionalism personified, if not a perfect example of personalities blending to make one cohesive force to be reckoned with.

“Christmas Grammar 2020” had the harshest aftertaste to it perhaps because of the recent swell in pandemic news over the past couple of months, but its bittersweet tone is easily a highlight of the second act in Christmas with Bigfoot. There’s no stone Achatz is willing to leave unturned here as he seeks some sort of redemption on the other side of every verse, and although his manner of delivery is one that can veer between stoic and gushy depending on what he’s trying to say, it’s his versatility that makes every moment of this album so gripping, no matter your interest in poetry of any variety. It’s both made for the connoisseur and the casual passerby, which certainly takes a lot of talent to produce.

We conclude Christmas with Bigfoot with “The Christmas Eve Wrinkle” and “The Hand of God,” a two-part story of both redemption and peace that could be interpreted a couple of different ways depending on your perspectives on the other aforementioned tracks here, only further spotlighting the multidimensionality that this album is built on. Because of the different emotional statements that can be drawn from these verses, there’s really no walking away from Christmas with Bigfoot without feeling something from what you’ve just listened to, and that just hasn’t been the case with the overwhelming majority of new records I’ve had in my winter playlist over the past few months. Streaking in Tongues and Marty Achatz are a match made in heaven, and the fruit of their recent labor is by far some of the best listening I’ve come across lately.