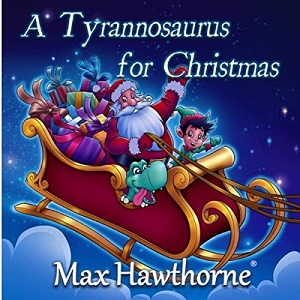 There’s nothing quite like childhood enthusiasm to get the ball rolling in a kid’s pop jingle, and Max Hawthorne wisely utilizes as much at the start of his new single “A Tyrannosaurus For Christmas.” He doesn’t need a lot of bombast or virtuosity to set the pace in this track; he’s got freewheeling energy that turns every lyric in the song into a sing-along-verse as familiar as something out of an old country fable would be. His use of fantasy poeticisms isn’t a new trick in this genre, but through the ease with which he puts them into practice here, you’d never know as much just by listening to this performance. This is a man determined to get us having a good time, and as you can guess from the whimsical title of the track, he gets what he sets out for.

Lyrically speaking, “A Tyrannosaurus For Christmas” lives up to what it’s billed as, but it doesn’t feel particularly fluff-filled in terms of substance. There’s plenty of emotion behind the beat, and I don’t think the verses needed to be presented in a more mature tone to carry some weight – they sound more fitting in the format being slung at us here. I agree with those who think that in children’s music you’ve got to keep things simple if you’re going to appeal to as large an audience as possible, and without sacrificing any of the feelings in this piece, Hawthorne can accomplish what few others on the underground side of this genre can.

The confidence that this arrangement exudes is something special, and I would even go so far as to say that it sounds like a product of a more veteran mind than it really is. There’s a lot of oomph to the sway of the percussion in particular that makes it feel like we’re listening to something more mainstream than indie, and a lot of this is because of the dedication Hawthorne is putting into everything from the instrumental setup to the delivery of the lead vocal. Some critics come after those who overthink their music, but this is a kind of material that needs a little extra in and outside of the studio, and he’s more than willing to provide.

“A Tyrannosaurus For Christmas” is an all-around feel-good kid’s release that doesn’t flirt with refurbished rhythm or rhyme for anything, but instead gives us a pretty solid clue as to what kind of music we can anticipate Max Hawthorne experimenting with next. His isn’t a style that was made for any other genre outside of children’s music, and I think this becomes clear when breaking down just how fantastic a job he does at making this feel like an immersive, multifaceted performance more than it is a DIY project from a loving father to his children. He has quite the gift, and anyone who thought that wouldn’t carry over from his role as an author of fiction definitely didn’t expect something like this to come out in 2021.

The music of Max Hawthorne has been heard all over the world in partnership with the radio plugging services offered by Musik and Film Radio Promotions Division.  Learn more https://musikandfilm.com