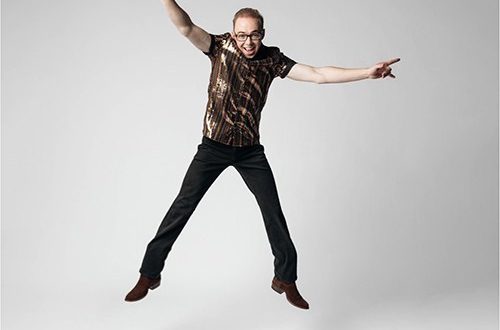 Baltimore, Maryland singer-songwriter Josh Christina might just have the fasted fingers East of the Mississippi. Not only do the piano key’s erupt in a volcanic cloud in the song “Let’s Get Woke”, Christina decimates any naysayers that true American rock n roll is dead. Simply put, Christina states his case for an exciting song sure to get one dancing and moving.

Sounding a lot like Elton John (“Saturday Night’s Alright For Fighting”) and fusing rock and roller Jerry Lee Lewis, a.k.a. The Killer, Josh Christina has the chops to immediately take the listener down a nostalgic road, making pitstops and shorts bursts of a modern concoction of rock, blues and soul. “Tonight is the night…turn it up, turn it on…let’s get woke” Josh Christina exclaims! The undeniable sound of the pounding piano keys is thrilling and head turning. This song makes one stop what they’re doing and wills the listener to pay close attention to every tone and Josh Christina’s crooning.

Josh Christina doesn’t croon in the same way Frank Sinatra or even Fabian. He’s flavorful enough with his deep voice to have this bit of cheekiness to him; still his confident and leaves enough room with the fiery music bed to unleash this sense of improvisation. He has a natural connection to the listener and instant rapport. According to his official biography, Josh Christina’s background offers some insight to his natural abilities: He inherited his musical chops from his biological father (a drummer), his mother (Baltimore-area singer Patti Christina) and his grandmother, who was a big band singer in the ’40’s and ’50’s.

One can’t help but think that Josh Christina landed on this earth in the wrong era – “Let’s Get Woke” transports the listener into a brighter, happier world with dancing and glamour. The piano sings in a way that it feels like yesteryear. Still, Josh Christina’s song is timeless and in that he’s bridging so many genres of music into a nice package. It’s truly an exciting song. Lyrically, it doesn’t need to be any more that it is. It’s a great sing-along song and just puts the listener in a super mood. Fans looking for deeper meaning songs might not dig this; but they will embrace the killer (there’s that Jerry Lee Lewis reference again!) piano orchestrations. Josh Christina distributes the emphasis on his vocals in all the right moves, and the piano is the driving force spiking the ball.

Overall, Josh Christina’s “Let’s Get Woke” earns high marks for its spontaneity and inducing immediate feelings of joy and outrageous fun for this listener.  As strange as this may sound, fans of Sean Mendes “If I Can’t Have You” will enjoy this song. Like Mendes, Josh Christina takes control of a song and makes it his own – it’s undeniably a memorable song. Audiophiles may even want to consider this track on vinyl – not sure if it available (yet) on vinyl, but the cool factor would certainly be there should Josh Christina go that route. He certainly can get a free pass.