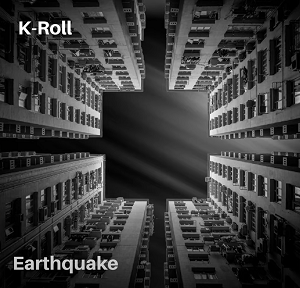 South Carolina doesn’t seem like an ideal place to start a career in show business. However, that is exactly what Kevin Rollinson set out to achieve, initially aspiring to be a recording artist/comedian. It’s unclear if he was planning to go the Adam Sandler route, or to keep the two endeavors separate. Through a fated craigslist inquiry, he would wind up becoming almost entirely ensconced in a music career. Now with steam as a full-fledged recording artist, and under his stage name, K-Roll, he has released his newest single, “Earthquake.”

Kevin Rollinson, was born in Greenwood, South Carolina. He first began performing in a local church, singing in the choir. At 18, he made the move to record an album, and he subsequently wanted to use one of the tracks for a personal ringtone. The track was A Capella, and unable to be used as a ringtone, he says. It was suggested to him to record a full length track, with instrumentation, to which he agreed.

Fast forward to now, and we have a full-fledged recording artist, K-Roll. Along with Quesh, $DOE$, and Nick Scott, K-Roll’s newest offering is the suggestively intended, “Earthquake.” To hear that title, you might have a literal expectation, but you would certainly be in for a surprise. In this instance, the Earthquake in question, is the kind you see at an afterhours club, so to speak. That’s right, this earthquake is caused by the hypnotic motion of the hips.

After reading Rollinson’s bio, and then listening to “Earthquake,” I must admit, I was a bit surprised. The expectation was of a humble, possibly even low key persona, that was involved in a different genre, altogether. “Earthquake” is certainly not a piece that would indicate any sort of shyness in its composer, but honestly, you never know. You could call the track raunchy, racy, or even sleazy, but this is 2021, and we’ve virtually heard it all and the remix. There’s just something different in the delivery of “Earthquake,” that sets it apart.

Perhaps the most noticeable thing about “Earthquake,” from a musical standpoint, is the very clever way that it’s mixed. You have four contributing artists, and to feature them all with any prominence, would seem like a daunting task. So it was impressive to hear the very clever arrangement on the track. It’s a relatively short song, which forces every line and section to count, and remarkably it never becomes recording booth anarchy. Instead, we get a very organized and dexterous final product, that is a fun listen.

“Earthquake,” might not offer the deepest or most existential content, but it exists to entertain, not elucidate.  Even with the song’s suggestively erotic content, it never really feels awkward or even dirty, for lack of a better word.  When K-Roll suggests that the female character contort herself, it seems as if it comes through that of a character he might play onscreen (he’s also an actor.) Of course, not everyone will find this to be the case, but for what it’s worth, “Earthquake,” ends up being more silly, than regrettable. As a once aspiring comedian, K-Roll would probably be ok with that.

The music of K-Roll has been heard all over the world in partnership with the radio plugging services offered by Musik and Film Radio Promotions Division.  Learn more https://musikandfilm.com