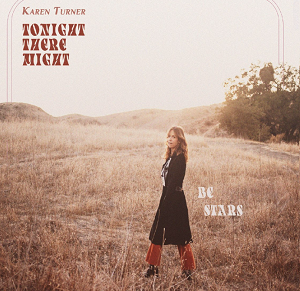 Indie singer/songwriters are enjoying their moment in the spotlight right now, but it hasn’t come without a lot of divisiveness among critics. In her debut EP Tonight There Might Be Stars, Karen Turner isn’t putting her music in one particular aesthetical camp over another and is instead focusing on melodic charm as her centerpiece. Songs like “Queen Ka’ahumanu Highway” and “Blue Mind” aren’t born of a desire to tether her sound to a scene, but instead a drive to put her feelings into a harmony that can be accessible to even the more particular fans of singer/songwriters in 2022.

Echoes of Joni Mitchell can be found in songs like “Jacaranda” and “If the World Is Ending,” but I like that Turner isn’t overplaying the hipster element of her sound. She’s got an alternative scheme to the traditional folk-rock model, but she’s also avoiding any temptation to play into conventionality to the point where it washes out the emotion in her music. Thoughtfulness is such an underrated quality in this genre, but it’s something that this particular musician is using to leverage herself against some of the bigger names in her scene at the moment – in the mainstream and the underground alike.

Self-awareness remains one of the focal points of Tonight There Might Be Stars even when the lyrics are seemingly observational, and I would be interested in seeing how this evolves over the next couple of releases that Turner drops. There’s a lot here that she isn’t completely revealing; a side of her personality that is filled with mystique guarded by the most personal of judgments on those around her, and I would really like to hear that part of her artistry come into focus the next time she composes a piece in the style of “Queen Ka’ahumanu Highway” or “If the World Is Ending.”

The surrealism in this EP is only implied rather than overstated in the style that I’ve found a lot of similarly designed records released in the last couple of months, and it’s to Karen Turner’s credit that she isn’t giving us anything wholly predictable in Tonight There Might Be Stars. To be a true independent, there’s no denying that separating yourself from the masses comes standard, but she’s making it undeniably clear how personal journey she wants to take with the audience in this material, whether we’re prepared for the mammoth deluge of emotionality or not.

Beautifully simple on the surface but poetically as complex as womanhood itself, Karen Turner’s Tonight There Might Be Stars is a gripping adventure across the mainstream border that feels like a real alternative to the fluff that has started to replace genuine folk-rock in the last half-decade. This is an extended play that puts all of its cards on the table by the time we reach the sixty-second mark in the tracklist, and if you’re able to locate another record that can do as much – full-length or EP the same – I would be very interested in reviewing it much as I have this profound debut.

Share
Previous Wreckless Strangers “When the Sun and a Blue Star Collide” (LP)
Next Chris St. John “Fly Away” (LP)