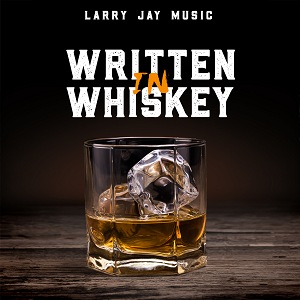 In the title track from his debut EP Written in Whiskey, Larry Jay isn’t asking the audience to hear him, but instead putting his voice front and center where we have no choice but to bask in the glow of its melodic presence. This urgent desire to take his place at the center of the chaos is consistent throughout the four-song tracklist of the record, but it isn’t sourced from arrogance when it comes to creating poetic symmetry between lyrics and music. Jay is an old fashioned troubadour, and it’s rather ironic that his electrified sound in this song is also one of the most pastoral excerpts from the EP.

The fretwork is a force to be reckoned with all on its own in Written in Whiskey, and I would point you to the song “Bad Ass Beautiful” as a perfect example of what I’m talking about. As much as Jay is able to croon his heart out in all four of these performances, the wail of the guitar in a track like this one gives him a run for his money beneath the spotlight. Luckily, this artist doesn’t have a difficult time straddling large and in charge instrumentation, as he proves so deftly in this piece.

While slower than the pacing of other songs on the record, the beat in “Blood” is stirring and pulls us closer to the melodic trappings of the music as nothing else likely could have, which is ideal in a ballad of its style. Whether he’s moving fast or slow, there isn’t a moment of Written in Whiskey where it feels like Larry Jay isn’t the one directing every movement of the band and the verses, which is quite honestly more than I can say for some of his closest contemporaries in the underground at the moment.

None of the hooks featured in this extended play sound over the top or even that theatrical relative to the standard in pop these days, with “Saving Lives” producing what feels like the most startlingly warm climax of any track on the EP. Jay doesn’t have to rely on the same compositional foundations that some of the other players in and outside of the Nashville scene have grown dependent on in the last decade or so, and his rejection of minimalism yet embracing of conservative songwriting cues is curious to me as a critic, to say the least.

Debuts are never easy to put together no matter the kind of skill you’re working with coming into a project, but you probably wouldn’t be able to guess this just from listening to what Larry Jay can do in Written in Whiskey. He’s a natural at this medium and specifically this genre, with his voice and stylization echoing some of the greatest players to ever make recorded country music, and if this is just the first cornerstone of a career, we haven’t seen but the least of what this artist is going to produce in the years still to come.