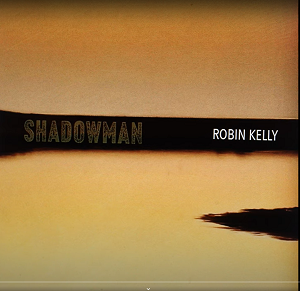 Shadowman, Robin Kelly’s sixth album release, remains very much the New Zealand songwriter’s album despite the cadre of five-star talent supporting him. Singer Sonia Wilson and guitarist Nigel Gavin playing alongside Kelly is a big deal, the mid way point of Shadowman might fall apart with it, but Kelly’s talents are the main event.

The foundation is his writing. Our first exposure to it on this studio album is the opener “Sunrise” and his near-painterly use of imagery helps spin him further out of an orbit with more limited artists. The playing and arrangement are musical balm equivalent to the song’s poetic subject matter. He keeps following the same general vein on the album’s second song. “Good Morning, Captain Sir” is another track with aspirations toward narrative and both its singing and vocal melody underline its frequent poetic qualities.

“Shadowman” provides considerable musical uplift early on. You can see placing the album’s title song this soon in the running order as a signal of confidence too as title cuts are often heard as being among an album’s definitive statements. It’s difficult to hear this track as anything definitive and not because of merit. Hearing it as a superficial throw away, however, comes from a little musical sleight of hand as its energetic pacing and buoyancy doesn’t always match the tone of its lyric.

The lush sway of “Our Last Valentine” echoes with whispers of Tex-Mex music though Kelly never goes too far in that direction. Suggesting it is enough. Sonia Wilson’s impact on the song outstrips her impressive contributions elsewhere on Shadowman as this duet seems to touch something personal within her those other tracks do not.  The percussion doesn’t boisterously announce itself but it’s a lesser recording without it.

Kelly comes at “Soul Song” from a different vocal direction than before, talking during some passages rather than singing. Even listeners at first unsure of the approach will fall in line fast. There’s a little more self-consciousness present in this song than in others. One unmitigated success beyond debate is the song “It Settled with the Moon”; Kelly can pat himself on the back for this track, if he likes. It reminds me, for some reason, of Paul Simon’s best later lyrics with its unexpected and lively turns of phrase. It falls, for the most part, in the tradition of “life” songs, but Kelly hits upon a fresh way of writing about the subject.

“Aficionado (Of Your Finer Things)” has some unexpected bite thanks to its colorful though somewhat distant bluesy roots. Kelly announces his blues influences overtly in some ways, note the heavy presence of harmonica throughout these tracks, but plays it sly in other ways. Not so with the closer. He ends with “Live Life Slow”, a lyrical cousin of sorts to the earlier “life” song “It Settled With the Moon”. It will play for some a little like a summation of the album’s themes but phrased, for a final time, in a raw yet artful fashion. Focusing the spotlight on him in the album’s final moments is a good choice and puts an emphatic exclamation point on Robin Kelly’s Shadowman.