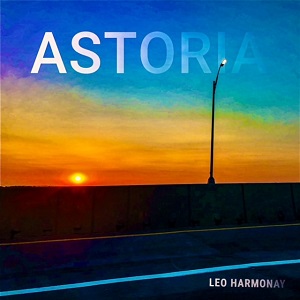 When David Bowie released his final album Blackstar, it was heralded as his finest work in ages especially since his nearly two decade absence. Many of the critics at the time were taken aback by the lack of powerhouse glam inspired or funk tracks in favor of a more stripped down approach with a greater emphasis on moody atmosphere and subject matter covering death and by all accounts Bowie looking back on his life, bathing in his accomplishments and experiences, while simultaneously wondering “Did I do enough?” It was a genuine surprise when he passed only two days after the album released which only further recontextualized what we had heard prior. Introspection in music requires a certain level of transparency and honesty many are often unwilling to acknowledge.

With the pop music landscape dominating in escapism, it can be hard sometimes to find music willing to sit in the deafening silence of life sometimes and ask, “um..so what’s next? And why am I scared?” Enter, Leo Harmonay and his recent stunning album, Astoria. Leo Harmonay is a folk, soul singer/songwriter based out of Hudson Valley NY who made his debut with his album “Somewhere Over the Hudson” back in 2015. Harmonay has stated previously that making music for him is therapeutic and allows him to work through his emotional weaknesses, and if I’m being honest, if this is the output he generates working out his weaknesses, its has transformed his artistry into his biggest strength.

This is album is seriously fearless. I will immediately make a disclaimer that this album is truthfully not going to be for everyone. If you are the type of person who prefers music as a form of escapism or can find yourself too emotionally compromised by intense themes, I’d pass on this one. This doesn’t negate the quality of the album, I just genuinely think it will be rather divisive on that principal but to me the specificity of its subject matter and production makes it stand out from the rest. One could argue that its narrative tells the story of an older man, running away from his problems both in her personal relationships, his health, and his spirituality.

Doubt fills this album from every inch, immediately evoking feelings of nostalgia with its opening “We All Know” but as the album progresses its darkness and vulnerability really begins to take hold. Obviously 2020 has been a difficult year for many of us, and the reactionary pop culture around us has reinforced that, but this goes beyond the ennui we’ve experienced collectively. With lyrics like “For a moment I remembered everything,” “connected in a disconnected way,” and hauntingly poetic stances like “the loneliness brings starlight blues” Harmonay is crafting a world of doubt and pain, with very little answers as how to heal from them, but to not forget them and to keep moving.

The back half of this album is stacked with jams with eclectic soundscapes closing on an almost tongue-in-cheek upbeat jam that feels like when a devastating movie plays a Beach Boys song over the credits. Harmonay is confronting hard truths about not just our world, but ourselves.