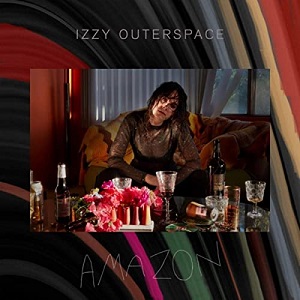 2020 was a year of immense change and hybridity within the alternative rock genre, and not just because of the culture that grew out of political and pandemic discord early on. From top to bottom, the alternative lexicon has been getting a makeover thanks to the insurgent efforts of a new generation of independent players, and to me, one of the finest among this incoming crowd is none other than Izzy Outerspace. Izzy Outerspace’s debut record Amazon was released in 2020 to a market unsure of its own sustainability, but nonetheless has quickly emerged as one of the best EPs to come out of the underground in the past twelve months without dispute.

The guitar parts in this record are always playing a supporting role, but this isn’t to suggest a lack of muscularity here at all. On the contrary, even softer tunes like “Wildfires” or the title track in Amazon have a string-driven excitement that only intensifies the emotional presence of the vocal (and right when we really need it, I should add). There’s nothing in this extended play that tells me Izzy Outerspace cares that much for virtuosity; after all, anyone can boast repetition – few can actually produce pure chills.

Despite the acerbic tone of her delivery as we find it in “Jump,” “Home” and “Empty,” the multifaceted poeticisms of these three songs from our songstress feel as much about love as they are its absence from life. One of my favorite things about Izzy Outerspace is the willingness she has to wear her heart on her sleeve, even when extending something so personal that it feels as though the track could break down from her vulnerability before it even gets started. She’s not afraid to be the real article, and I can only hope her mainstream counterparts follow her lead in the years to come.

There didn’t need to be quite as tight an emphasis on the harmonies in “Stars” and “Spare Time” especially, but I can totally understand the goal just the same. To some degree, it’s reasonable to see why Izzy Outerspace would want to go with a bleached look for these two songs, primarily as a way of focusing on the rawness of her statements, but I don’t think it’s something she should make a habit. She’s still finding her footing, but overall this is a really well-rounded effort that doesn’t need to be gone over with a red pen at all.

Not since listening to a record titled The Family by Timber have I been as bewitched by a tracklist’s soft melodic whispers as I am when listening to Izzy Outerspace’s Amazon this winter. Amazon is both a ray of sunlight and an impossibly dark cloud on an otherwise perfectly nice day, and if its contrasts don’t prove to be too overwhelming for your palate, I think you’re going to find this EP to be every bit the watershed release for this singer/songwriter that I do. A solid five out of five stars, this is required listening this season.