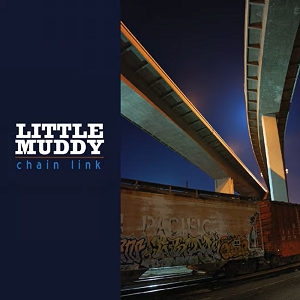 When it comes to music production, most artists confide such lofty aspirations to someone other than themselves. Certainly, the act of writing the music is half the battle, maybe more, but without a great audio engineer on your side, your words may as well be coming out of a tin can. I’m not sure this is controversial, but look at it this way — you’re going out to see the latest Super-Spider-Bat: Team-Up picture and everything, from the effects to the casting, is perfect… until the lead opens their mouth and sounds like their microphone was underwater and a mile away. You can’t tell me that the movie is salvageable if the dialogue isn’t, and the same goes towards audio engineering in music, but tenfold.

For Rich Goldstein of Little Muddy, all it took to get interested in finally making the leap to engineering for their new album Chain Link was about thirty years in the industry and five albums prior under the moniker. No sweat. By doing so, Goldstein has seemingly unlocked a new aesthetic for Little Muddy. Achieving modern timbre with a firm grasp on the iconic sounds that created the band we know today, Chain Link has arrived on the scene to usher in a new era for Little Muddy’s creative dynamic.

Opening with the title track, “Chain Link,” the album tears onto the scene with a full drum sound, complemented by lovely deep bass and formidable, scaly guitar. Those unfamiliar to Little Muddy might be anticipating vocals to crop up at any moment, but this isn’t that type of show, folks. Allow the guitar to do the singing for you, and allow it to do so beautifully. “Groove Town,” one of the album’s lead singles, brings in a much more mellow air of ease and the duality between just the first two songs lends confidence to Chain Link from the start. “Satellite Spy” brings the speed back up, meshing acoustic and electric guitar against something out of a highway chase. “In the Distance You’ll See” punctuates the first quarter of the album as a short and sweet respite before “Slow Time” maintains the lower energy and gives listeners perhaps the catchiest guitar melody of the album thus far.

The back half of the album begins with the highlight “Triple Agent,” a song primed for those akin to faster, freeform pieces. The narrative arc of the track allows listeners to project shootouts, fast cars, and gadgets galore. Another song I came to love and revisit even outside of the album is “Scirocco Escape,” with its distinct drum pattern and tone elevating it above and beyond the surrounding songs. “300 Years from Now” achieves its similar act break intentions with detailed steely acoustic guitar work and mandolin combatting Chain Link’s overall electric reputation. “Night Highway” evokes the perfect night drive attitude, with a calm and cool air flowing from start to finish on this track. Before you can settle into the rhythm too much, “Spark on the Horizon” erupts the serenity with one of the faster pieces on Chain Link, and the double whammy of the cool-as-ice “Ricardo’s Ride” following it up serves as a high point on the album. This latter half of Chain Link certainly earns most of the album’s praise, but both halves balance fairly evenly, with the flawless pacing uniting each track together.

Closing Chain Link out in quick succession come the evocative “Edge of the Forest,” “Lagos Layover” (which functions as hands down the grooviest track on the record), and the triumphant finale “Route 51 South,” which rightfully blows the roof off of the place. Overall, there isn’t much not to love about Chain Link; Little Muddy shows up to knock your socks off and then some, and they achieve the said goal with relative ease. Goldstein’s knack for production and sound engineering push Chain Link far across the finish line, marking a new era for Little Muddy altogether — what comes next will certainly only further develop the band’s sound and talent that much further.