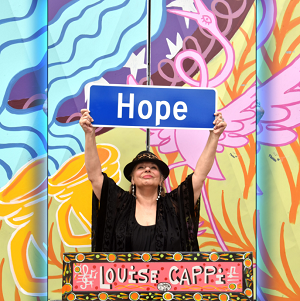 When I first sat down to refamiliarize myself with the work of Louise Cappi, I had to do some minor research to remember her background. The daughter of Al Cappi, the late great jazz guitarist, there was certainly a great deal of musical education sprinkled across her past. Growing up in Long Island, Louise would follow her father to his gigs and sing with the band. His teaching was strict and regimented, and the training ultimately paid off as he would remind her to be prepared and know her lyrics — of course, taking lessons from a parent is a concept good in theory and generally negative in practice, so the lessons didn’t last long but the memories did. Louise Cappi’s music is direct proof of this, as she has managed to knock out a country-spanning residency from New York to New Orleans. On top of this, she has one album under her belt and another on the way, due out in Fall 2021. The impressive work ethic is nothing to scoff at and if you aren’t a true believer just yet, her unashamed enthusiasm will certainly come across as too infectious to deny with her latest single “Hope,” off of the impending album of the same name.

I wasn’t too sure that a song called “Hope” would affect me very much; the last year has understandably turned most optimists towards a path of pessimism and cynical nature, and the very word “hope” might make people come shrug and trudge on. However, Cappi’s attention to such life paths is something unparalleled in modern music and she seems to fully grapple with such mindsets as she welcomes all victims of pain, sorrow, and anguish under her wing — “Hope” undeniably gets under your skin and makes you reckon with the hardships you’ve faced in life thus far.

Lyrically, Cappi knocks it out of the park by giving listeners something truly earnest and open-hearted, a position most in music will shy away from. The disarming nature of Louise Cappi’s approach to rock and blues feels deeply indebted to the OG blues musicians of the 1920s as much as it feels attributed to Janis Joplin and co. The exact influences are hard to pin and Cappi’s music more than speaks for itself and never stoops to coming across as derivative.

“Hope” is a piece of music that feels as personally dedicated to the songwriter’s own life as it does to the listener’s experiences, and walking such a thin line is an impressive feat that most in contemporary music would have a tough time reaching. The enduring impression that “Hope” has left on me as a music critic and as a music enthusiast feels unique, and while the song probably functions first and foremost as a direct response to last year’s horrific pandemic, there’s a universal quality within the lyrical nature that will see the song growing old with audiences and Cappi simultaneously. The future of Louise Cappi’s music feels more certain than ever with an initial single this air-tight, and there’s no denying the power of Hope still to come.