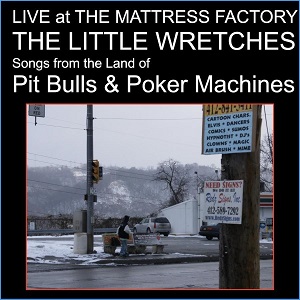 The Little Wretches “Live at the Mattress Factory”

In Live at the Mattress Factory by southern twang-infused folk singer Robert Andrew Wagner, operating under the band title Little Wretches, we find the man wrestling deeply with plenty of complexities that give way to a clearer picture of desire.

Right off the bat, I’ll say there’s something almost nostalgic about even hearing a live album, this being recorded with a live audience of whom some get to actually interact with Robert in some very enlightening ways. Whether they’re correcting him, agreeing with him, or just acknowledging his points, you get this electric sense of audience presence easily invested in his tired, world-weary persona. For an album that aims to evoke feelings of a simpler time, the lyrics are notably complex and wordy. Some of the songs border on the 9-minute mark and I won’t lie, the whole preceding is a little exhausting. Not in a bad way, more like you’ve gone on a specific journey with someone, and no stone is left untouched. Plenty of live alums run on the long side if only because it’s a victory lap of sorts and a chance to flex musical talents away from any kind of artificiality, and instead of doing a typical single acoustic performance, Wagner has smartly brought along violinist David Maund, who brings an added texture and personality even when the songs get on the more morbid side.

An interesting thing about the structural choices of the album is that each song, for the most part, pairs back to back incredibly well building off of established themes and sometimes offering a different perspective on the same idea. Opener “Dark Times” for example is a moody harmonica heavy rumination on the past year and the reflections of doubt that even our artists haven’t risen up to the notion of exposing injustice. It’s something he even doubles down in in the subsequent track “Whether or Not You Like It”, which covers the growing ennui and tension many feels, with a strong need for an outlet or voice. A strong thesis that carries is a sense of moral justice and expression of freedom.

Even in conversation with the audience, references to Baldwin and Nieshce flow through the air and turn what could have been a simple-minded act into something sharply dense and about the human experience. Many of the songs in the middle portion from a deeply personal place, such as a ballad ruminating on the experiences of Wagner’s sister becoming a new mother and the emphasis on responsibilities to uphold, and this is sharply contrasted with the seemingly easy-going if not darker undertone driven sounds of “Father’s Day”.

Wagner certainly has a way with words and many times, even simple phrases like a retelling of his father saying “Don’t You Give Me No Looks”, has this almost violent undertone. Wagner knows that people and the human experience aren’t perfect, and I think the title of the Mattress Factory is perfectly apt because Wagner wants us to feel the bumps on the way down, even if we’re caught seemingly safely.