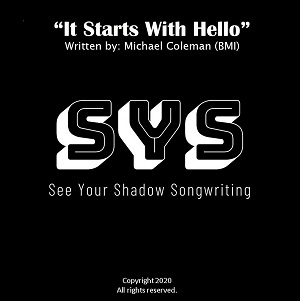 See Your Shadow (Michael Coleman) “It Starts With Hello” (SINGLE)

See Your Shadow is the brainchild of Singer/Songwriter, Michael Coleman. Known as “The Metropolitan Cowboy,” Coleman enlists a revolving reel of musicians to participate in See Your Shadow. Originally formed in Columbus, OH, Coleman is the primary songwriter and creative director of See Your Shadow. See Your Shadow seems more like an idea or an entity, than a traditional band or group. Due to situations in which groups incur lineup shifts and shakeups, it’s not uncommon or ill advised to just go the other direction.

The newest single by SYS is called “It Starts With Hello.” Since switching genres at one point, Coleman and company have embraced a Country and Western style, hence The Metropolitan Cowboy moniker. “It Starts With Hello,” has a distinct C&W/Americana flavor, but avoids any cliches or stereotypical tropes. Michael Coleman has an immediate and distinct likeability to his voice, that feels comforting and sincere. This facet to his persona helps the song’s humanitarian nature feel more genuine.

Musically, there isn’t much meat on the bone with “It Starts With Hello,” but a single serving is sufficient. While SYS keeps it relatively simple, the mix is mostly flawless. Coleman’s vocals are front a center, allowing all the lyrics to be discernible and digestible. There’s an accommodating quality to this track, that you just have to experience, first hand. While Country music can be extremely polarizing, the energy and good intentioned aspects of this song, is likely to be embraced for what it is, and less by association.

Empathy trumps hate/when you choose to relate/to a life that’s not your own. Country music is generally for being socially motivated, which isn’t to assuage it any way. The genre simply likes to cover more personal topics, that its audience finds a sense of identification and reciprocity in. This song, however, has a deep conscience. It’s inspired by the advocacy for and the problem solving power of simple communication.

The drum tracks on “It Starts With Hello,” are especially outstanding. The depth of the percussion and the volume, give this tune a more rocking feel than most Country. It gives the track a greater sense of immediacy and inclusiveness. The melody is well supported by what sounds like a subtle synth piece under the guitar. Surprisingly enough, Coleman and company have a background in Electronic Dance music, which you can detect on “It Starts With Hello,” vaguely.

“It Starts With Hello” is just the right amount of substance and performance. Coleman is a talented songwriter, and he obviously knows how to get the most out of a little. The message is easy to understand and even easier to appreciate. It’s little gems like this that come along, and help put things in perspective. We sometimes take the most obvious gestures for granted, not fully appreciating their subtle power. It’s worth remembering that a simple hello, can change the entire trajectory of your life and the one you greet or the one greeting you.