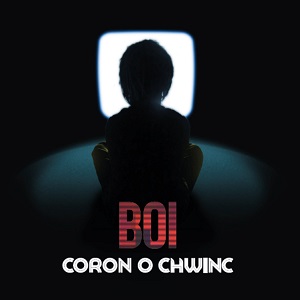 Welsh based alt rockers, BOI, have released their debut album, Coron O Chwinc. The album is sang entirely in traditional Welsh, and the song titles list like a Rosetta Stone exercise. They say, Music is the universal language though, and BOI certainly exemplify that idea with the sheer power of their work. With 10 tracks, Coron O Chwinc is as impressive and motivated of a debut as you will hear. The Wales based group show a keen ear for melody and a propensity for great songwriting.

Officially released in June of 2021, Coron O Chwinc is undoubtedly an anomaly in the modern musical landscape. It stands alone as defiantly traditional, imbued with modernity and passionate attitude. The musicality is instant and outstanding, and song for song, this is a tremendous effort. It’s likely going to be an uphill battle to get audiences in the States to give the album a chance, but it may not matter. Just recently, Bad Bunny was able to reach the top of the charts, without a single word of English uttered on his entire album.

“Ddim Yn Sant” is a mid to up tempo swing beat, with just the right amount of snarl on guitar. The chorus will stick to you like syrup, and I immediately wanted to move to this one. This is a pop song, through and through Unfortunately, we just don’t get much Pop like this, anymore. This is the second song from the record, and it sets the perfect tone, for what does and doesn’t come, a bit later.

“Rheswm Am Gdwm” is a slower tempoed, almost bluesy number. It’s got a bit of a cheeky feel to it, but not a complete turn off. What it lacks in energy, it makes up for in consistency and restraint. You can almost sense a little Kinks influence here, or more specifically, Ray Davies. Not the highlight of the album, but certainly a valuable addition.

“Tragwylddoldeb” is one of the singles from the record, and stands out in the best of ways. It’s a piano ballad that shows the tender and thoughtful side of BOI. In bygone eras, a track like this would have been considered somewhat obligatory. While such tropes are no longer adhered to in modern times, it’s nice to hear the boys show their range a bit. It’s got something of a Beatles vibe, but overall, it’s a simple and heartfelt sentiment.

BOI will come at you like an unidentified species or a spacecraft of ambiguous origins. Strict Welsh dialect is not one that is privy to a expansive segment of society, so it really gives this record a certain cool factor. More than anything though, this is simply Great music. The musicians themselves are so skilled from a compositional standpoint, and they know exactly who they are and how they want to sound. Here’s to hoping that great records, such as this, can not only ingratiate people to Welsh culture, but make pure rock and roll bands, a well represented lot, again.

User Rating: Be the first one !
Share
Previous See Your Shadow (Michael Coleman) “It Starts With Hello” (SINGLE)
Next The Ever After “Take Two” (EP)