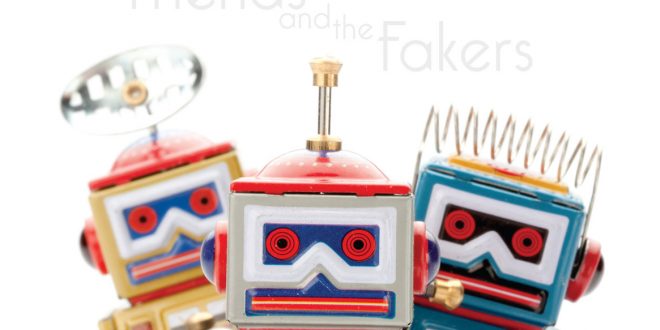 LowRay – Friends and the Fakers

The muscular riff that introduces us to the eponymous first track of Friends and the Fakers doesn’t waste a second before nudging all who press play on indie rockers LowRay’s debut album into the searing heat of the pair’s decadent sound. Mechanically stretching our palates out right alongside its soaring melody, this opening salvo has plenty of opportunities to devolve into a mess of tuneful white noise, but it resists the very notion every time. The pointed lyrics of front man Daniel Fowlds are consistent and thick next to this bruising groove, but as we move into the supple “Western Song” and eventually towards the simple acoustic jaunt “I’m Sorry,” the sonic assault becomes more poetic than rhythmic, and Fowlds’ emotional lyrics ascend to the forefront of our attention.

“Western Song” incorporates sampling of Americana-flavored folk rock with a dash of the jangly riff rock that got us started in the title track, and drummer James Irving keeps it tightly wound with his precise timekeeping. “I’m Sorry” is an acoustic ballad centered on Fowlds’ inviting drawl, which anchors a lot of these songs within the realm of pop music despite their rambunctiously experimental attitudes. We’re not expecting “8 Track Tapes” when it comes smashing through the tender smoke rings of “I’m Sorry,” but it makes itself at home with an anti-fundamentalist groove nonetheless. Some might call this record a direct result of the surrealism movement in contemporary indie rock, but personally I think that giving other musicians credit for what is obviously something of LowRay’s own unique design would cheapen the integrity of what they’ve done in their rookie offering.

Friends and the Fakers finds its penultimate sweet spot half way through its track listing in the compressed R&B song “Palisade,” which moves with the nimbleness of an assassin and points us towards the richness of its shadowy harmony. The lyrics are icy and the music is unapologetically stoic, but the evocative effect that comes through the almost Gothic delivery of both is quite difficult to avoid if you’re within earshot of its grandeur. “Waiting For You” slaps us a coat of polished pop optimism onto the record as we press forward, only to be met with contrast in the pastoral ballad “Lonely Tuesday Night” and later on the opulent “Let Me Be,” which is easily the most aesthetically-pleasing track on the album cosmetically.

If “Let Me Be” exists to prove to us that LowRay can play with jazz theory in their indulgent strain of pop without sounding off-kilter, “Sooner or Later” must have been conceived to show us that Fowlds can get gritty with his psychedelic riffs as well. There’s a smoldering edge to the guitar parts in this song that is akin to harder varieties of rock than what the majority of Friends and the Fakers presents us with, but it doesn’t feel like a desperate attempt to validate Fowlds’ ego as an axeman. Actually I think that if anything it shows off just how multidimensional these guys are; there’s no technique they’re intimidated by and no groove too peculiar or ambitious for them to tackle head-on. “There’s a Place” finishes us off with a divine hook that is strong enough to make the track a good single, and it captures the totality of what the record offers without being too anthological in its structure (it runs just a hair over three and a half minutes in length). Overall I really loved Friends and the Fakers, and if LowRay amplify some of their more electrifying left-field attributes I think they have the potential to reign supreme in the American pop scene much sooner than later.