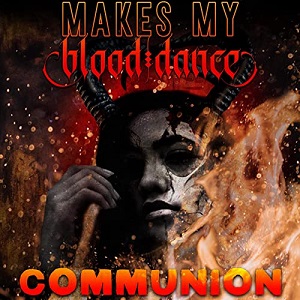 Mesh fast n’ loud heavy metal with some danceable grooves tailored to the needs of an increasingly demanding generation of partiers and you’ll end up with something akin to the sound of Makes My Blood Dance, whose new single “Communion” is generating a lot of attention for the band this December. A self-described disco/metal act, Makes My Blood Dance put a lot of stock into the massive beat behind this track from the get-go, and whether experienced as a music video or simply as a single, “Communion” definitely feels like the adrenaline-fueled crusher that was otherwise hard to find this winter.

The music video plays into a pretty traditional rock concept, only in this instance it’s been spruced up for younger viewers through a modern flamboyancy that is as much punk as it is metal. The chugging nature of the riff here aside, there’s a brutishness to the very construction of both the visual component of the video as well as the music in the backdrop that we can’t escape from, and while it might sound surprising, this isn’t something I’ve seen a lot of in the new content out from metal’s most established acts in 2020 at all.

This lead vocal is as aggressive as the instrumentation beside it is, and I even think there’s a case to be made that the verse is laying out the blueprint for the percussion even more than the bassline is. You don’t have to add in any sort of synthetics when you’re already mixing something as tightly as “Communion” has been, but when taking into account the natural moxie of the band in general, it’s all the more obvious that utilizing filler of any kind would have been more than a bad idea. This group doesn’t need it, and they’re actually giving a solid class on how to resist its influence in this single.

The rhythm of the drums in “Communion” is very precisely put together and adds to the depth of the guitar part substantially, in turn making everything in the track sound a whole lot heavier. One has to wonder how Makes My Blood Dance achieve this same result in a live performance, but given that it’s unlikely we’re going to see one from the band anytime soon, this song does a good job of at least teasing us with the muscularity of their sound as it’s found in a studio environment.

If you like heavy music with a good beat to get you out of your chair and onto whatever dancefloor you call your own, Makes My Blood Dance just might be the band for you, and their single “Communion” and its accompanying music video are prime content you need to hear this month. Makes My Blood Dance have chosen a very interesting time to try and become rockstars, but even with the numerous challenges that are still lying ahead of them, I would be remiss if I said they shouldn’t keep pushing on with a sound as stylish as theirs is.