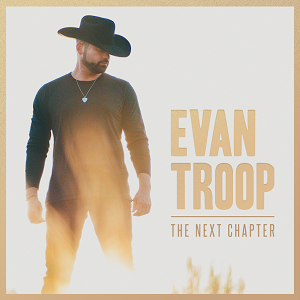 “The Next Chapter” (EP) by Evan Troop

The Next Chapter is the new five-track collection from Evan Troop. Bulging with melodic rock guitar riffs, and a bevy of vulnerable lyrics, Troop champions his songs with a brazen voice laced with charms and natural melodies. From “Gone” to “Your Man” Troop tackles feelings of regret, self-doubt and even passion in these peaks at an artist just now emerging onto the national scene. You can hear that elbow-grease at work in his voice this is an artist that wants it and is willing to do the work.

Troop is based in Dallas, Texas, but grew up in both Canada and Texas. After high school Troop sailed around the world as a ship’s officer aboard merchant vessels. He also served eight years as an officer in the United States Naval Reserve. After serving his country, Troop earned a Masters in Business Administration from Southern Methodist University. To help pay for his studies, he fronted two bands Bourbon Diesel and Uptown Strange. While he may have a job in finance, his passion for music has never wavered. Troop instills in the listener more about his feelings and thoughts, than actual narratives about the navy and schooling. As a listener, I gathered a great day about the man behind the microphone.

“My Time Now” has a juicier guitar arrangement and reverb. It resonates differently. Darker. The term outlaw guitar comes to mind, like something you would hear from Bon Jovi in the early 90s. The percussion is sticky, and taps along the entire song like a relentless clock ticking. You can’t bring me down, Troop sings. His confident voice is made to be a front man.

Crashing guitars appear again in the killer track “Slippin’ Away”. I never thought I would be so misunderstood, sings Troop. His voice reminding me a lot of the energy and mood of a cocktail of Three Doors Down’s Brad Arnold and Chris Daughtry. The fourth track, “Enemy” went even deeper emotionally. After a few listens, this song struck me as the most revealing to Troop’s character. I-I-I’m not alright, not this time, I’m not able to be free, he sings. Why am I my own worst enemy, he continues. I found these lines to be utterly relatable. I think we all of those days where we face success or are chasing it and we can’t seem to get out of our own way. I think he nails that feeling in “Enemy”. Finally, the last track “Your Man” is a bit more romantic, more subdued than the others. It’s still a power pop rock tune. I think the sequencing, ending the collection with “Your Man” is a great evolution of an artist that has moments of insecurities, regrets and ends up with shoulder’s proud confidence is quite endearing.