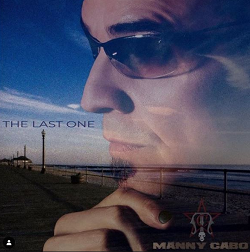 Singer Manny Cabo catches wildfire again in his new country-rock fused barnburner “The Last One”. And once again Cabo teams up with frequent collaborator, the touching songwriter Bonnie Warren. “The Last One”, a fierce reminder that tomorrow is never promised and don’t put off ‘till tomorrow what can be done today, is an anthemic calling. A former contestant of The Voice, Cabo, has that perfect rocker voice to lead the next generation of listener’s down his soulful, genuine path.

Cabo isn’t leaving the rock world for the country genre. “The Last One” is a perfect blend of rock harmony and country/roots melodies. Cabo, born and raised in Elizabeth, New Jersey, is now based in Nashville, Tenn. The move to Music City has enlightened his country leanings, but he still has that grit and that irresistible personality coming from his vocal pipes. You can’t teach that, nor can Cabo lose that ‘it’ factor just by moving into a different zip code.

Many audiences recognize his voice from the coveted four-chair turn (judges Gwen Stefani, Blake Shelton, Adam Levin and Pharrell Williams) and his blind audition featuring Whitesnake’s “Here I Go Again”. He later performed The Who’s “Baba Riley” and while his time on the NBC contest seemed short, his talents are far-reaching. “The Last One” is Cabo’s fourth collaboration with Warren. The pair has now worked together on “Hate Has No Home Here”, “Wear Your Words” and “All Night Again”. The system is working out for both of them, to say the least.

With so much of Cabo’s story already out there for the world to see, and for listeners to come to know him as an artist, what then does “The Last One” bring new to the table? He brings unending joy. Yes, this song has some Hallmark-movie of the week feels, but it also adds fodder to Cabo’s evolving artistry. Baby, any time could be the last one, oh, could be the last one, yeah, he sings. Cabo’s rock-laced vocals are paired nicely with the southern, slight twang melodic guitar. The up-tempo track has moments where you can even hear Cabo speak to the band, almost like a live-setting. He has such a natural presence, so approachable. Yet, he’s a rock star. His charisma is unmatched, there’s this element of awe. He doesn’t sound pretentious or patronizing in this song. It’s an uplifting, inspiring song. He delivers a great emotional trigger and does it in an entertaining way.

I think fans expecting him to stay in that Whitesnake world, that classic rock era, will not be disappointed. “The Last One” still has the rousing percussion, brash electronic guitars (again, leaning into that Eagles or Laurel Canyon Sound), and I can’t say this enough, Cabo’s charisma-filled vocals. It’s modern country and I think most people agree now that the country sound imbues folk rock and pop rock. Cabo uses this to his advantage. If you’re a fan of Daughtry, Matchbox Twenty or even Sturgill Simpson, than “The Last One”, respectfully should be included on your playlists.

The music of Manny Cabo been heard all over the world in partnership with the radio plugging services offered by Musik and Film Radio Promotions Division.  Learn more https://musikandfilm.com