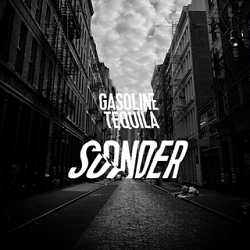 Gasoline Tequila has a new single out – “Sonder” is the title, but there is so much to talk about when it comes to this band it is also worth going the entire distance to review this song and also a music outfit not quite like any other I have heard, but might just be because I have not been around in the Flamenco guitar scene enough to know about them, but one thing I do know it I love Flamenco and classical Spanish guitar enough to balance this with a description of what it is they really are doing.

“Sonder” is not only an amazing piece of guitar instrumental music, it is done by two players that must be further exposed for all they’re worth, along with the once, and to be again, vibrant New York music and arts scene. Talk about a stunning piece of work, this amazing tune is not only one for the guitar/musician and audiophile type fans, it is also for the everyday music lover t be inspired by. If it can draw casual listeners in it can do what its powers are ultimately for and not just play to the fans who are already aware of them.

This music has the ability to transcend many of today’s discomforts and heal through the energy of music itself as the medicinal healer that it is. And there is more to it than just hearing the song because of the unique type of performing act Gasoline Tequila are, and how they came to be and what they aim to achieve, which they are already doing. The masterful playing ability on display is only part of what the larger picture tells, and it’s just as exciting and creative as the music. It would be nice if there was more of them to go around.

The roots of “Sonder” come from watching the New York sunset, and it was written during the pandemic, so the majesty of the song is conveyed through the current NY wavelength which is devastating to even hear about in the news, let alone live through in such a densely populated area. The band led by Massimo Lusardi with guitar player Hernan Romero is where the story about them begins and the songs they have are coming from. They met by chance and the rest is great history, so to speak.

The song, as with others I have seen videos of, is enormously satisfying to say the least, especially if you are into Flamenco guitar and acoustic guitar instrumental music in general. “Sonder” smokes with the best of them without question, and it comes down during the pandemic at a time of need for healing, particularly in New York, so it delivers based on that alone. These two players are immensely fantastic, and I am not sure why, but they should be heard on the global scale, but then New York is a huge city, and it has that gig sound for it. These guys are brilliant, and “Sonder” is just one example.

Mark DrueryThe music of Gasoline Tequila been heard all over the world in partnership with the radio plugging services offered by Musik and Film Radio Promotions Division.  Learn more https://musikandfilm.com