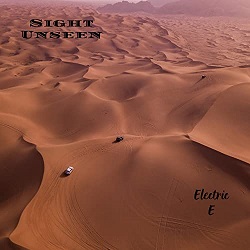 Multilingual poeticisms. Raging bastions of white noise manipulated into bittersweet melodicism. Harmonies that test the limits of their own construction. A rhythm that doesn’t seem to know where it’s going – or why it’s even chugging forth in the first place.

There are contradictions, conflicts and aesthetical riddles that follow us down every seedy rabbit hole that Ella and Sight Unseen have in store for listeners everywhere this fall season, but as anyone who has heard the music of Electric E beforehand is already more than aware, this is exactly what you should be expecting amidst the dreamy tonal and textural communique this up and coming Seattle player is building his reputation on.

Where so many electronic artists both in and outside of his neighborhood in the Pacific Northwest are rebelling against indulgences that their forerunners would have embraced as essential in crafting avant-garde music, Electric E isn’t afraid to pick up the pieces of past glories (including ones predating his own career) and forge something that a modern audience can grow to celebrate as their own in more ways than one. It all amounts to a pair of must-listen records out this autumn, both of which I recently had the pleasure of taking a peek at for myself.

Everything is larger than life in Sight Unseen; from the synthetic trappings of a glistening “China Doll” to the aching tonal gush of “Situational Sangria,” “Timelessness” or “Down by the Sea,” scarcely is there an instance in which Electric E isn’t going out of his way to abuse the volume knob to the very limits of reason. It’s overwhelming for sure, but if analyzed through the lens of the blushing bass volley in tracks like “Timelessness or “The Rearrangement,” it starts feel as though Sight Unseen is a complete and total commentary on contemporary electronica merely packaged as focused, even pop-oriented material for the creator.

Ella’s tracklist is far more brooding and invites some imposing textures on its own – primarily in its pair of title tracks – and between the two records, I think it’s impossible to walk away from their music without confirming this composer’s adherence to efficient standards. As lush as everything in “World of Mirrors,” “Memory Lane,” “Maria” or “Again and Again” is, there’s no extra fat left untrimmed when everything is said and done here.

In a competitive scene like Seattle’s, it can be difficult getting out from under the fame other players are finding whilst trying to launch a campaign of your own, but for Electric E, it’s going to be difficult staying under the radar with a sound as brash and intuitive as his is at the moment. Sight Unseen and Ella hit us with a collective ninety minutes of pure experimental bliss, and whether you’re the type to normally go for something as outside of the box as this style of play is, I would recommend giving Electric E some of your time this autumn simply to experience melodic brilliance at its most untamed.