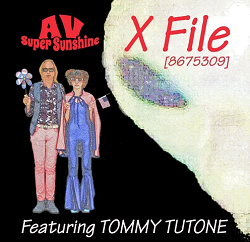 Wisconsin’s AV Super Sunshine is one of the brightest stars in the indie music world for many reasons. He adopts a comprehensive approach to his art. AV Super Sunshine isn’t aware of music’s power alone, but exhibits a sharp awareness of how music and visual imagery complement one another. His subject matter is free-ranging and never confined by cliché. “X File: 867-5309” has a thoroughly modern veneer, but attentive listeners will discern solid fundamentals as old as popular song underlying its structure. His approach to new material and performance is perpetually inspired; you never feel like Sunshine is operating at half-speed. The new aforementioned single has all this working for it and more.

The “more” is the surprising use of the hook from Tommy Tutone’s early Eighties hit “867-5309/Jenny”. Sunshine has worked with Stephen Wrench and his company Musik and Film Promotions on several past releases. Tommy Tutone singer Tommy Heath mentioned to Wrench, his one-time manager, about how he wanted to find someone willing to use his master recording of the track’s indelible hook in a new release. Sunshine and his producing partner Michael Bradford worked it into a gestating Sunshine track and found it a perfect fit. The majority of listeners will likely agree.

You hear two different uses of the hook. AV Super Sunshine presents “X File: 867-5309” in two distinct mixes, the first over four minutes long, the second a little over six. The first mix is intended for radio to my ears with its streamlined running time and the song’s texture. There are a variety of instruments working during this track, but synthesizers and other electronic influences dominate the sound. It is never cold or sterile sounding. AV Super Sunshine has, since first emerging on the scene, shown the ability to make the best use of these musical tools without sacrificing anything.

The dance mix highlights Sunshine’s vocal but never at the expense of the track’s other contributions. Many listeners, however, will enjoy the focus on his voice – there’s a measure of pizazz present in the vocal track that helps keep you listening though Sunshine wisely never overplays it. He highlights different instruments in this mix, as well, and the extended running time of this track does not prove to be a mistake. The music has you involved from the outset and it isn’t difficult to lose yourself hearing this take on the track. It’ll definitely go over well for its intended audience.

“X File: 867-5309” represents the latest chapter in a creative partnership that has endured longer than most. It is a testament to the enduring chemistry between AV Super Sunshine and his producer Michael Bradford that they are continuing to work at such a high level after numerous past releases. The new single is full of evidence they should continue; both versions of this track revisit the past with a lot of imagination while still completely living in the now. It’s a jewel in AV Super Sunshine’s work well worth seeking out today.