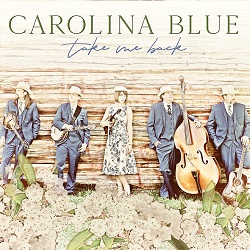 Carolina Blue – Take Me Back (LP)

Carolina Blue don’t waste a shred of time getting us excited about the magnificent zeal they offer in the new album Take Me Back; right out of the gate, “Grown Cold” pumps up the energy with a fast-paced groove that will only get more infectious as we press on. The first in the three-part taster that includes a balladic folky in “Take Me to the Mountains” and a cover in “Country Lovin’ Son of a Gun” that feels as righteous as any original ever could, “Grown Cold” is absolutely the right song to get us started on a smooth note in Take Me Back, which, despite what its title might allude to, is actually a thoroughly forward-looking affair for the musicians who bring it to life.

“Country Lovin’ Son of a Gun” isn’t the lone cover here – from its impatient beats, we’re led into the quaint and somewhat pendulous “Blue Grass,” one of the more tonally communicative works on the album. It isn’t quite the sporty number “Ballad of Mary Ann” is, but let’s face it; not too many songs can be. “Ballad of Mary Ann” puts raw melodies at the forefront of the mix just to let us bask in the lush temperament of Carolina Blue’s sound at its most untarnished and fruitful, and much like their cover of “Too Wet to Plow” (which features a wonderful music video as well), it doesn’t include any of the useless fluff some country singles would just as soon be built around.

“Number 73987” actually throws a little bit of blues into the melting pot of melodies just for the heck of it before turning us over to the thrust of a countrified “Raining in Roanoke,” one of the more deceptively casual beat-driven tracks of the record. Its scathing commentary aside, “Raining in Roanoke” actually has a really optimistic swing to its rhythm that makes it one of my favorite go-to songs on the latter half of Take Me Back, and when compared with the superbly multilayered compositions “Lost and Lonely,” “I’m Gonna Wait on Jesus” and the blushing “Black Knob Breakdown,” it definitely asserts Carolina Blue as a band that doesn’t really need to get too elaborate in their performance to sound like a true southern symphony orchestra.

Take Me Back brings us across the finish line with “March Around Jericho,” a blunt gospel song that concludes the album with an old fashioned lyricism that feels all too appropriate considering everything we’ve experienced in the preceding forty minutes of play. Carolina Blue are a band that I had a lot of high hopes for coming into this review of their third official album, and though I had a limited scope of their talents before sitting down with the twelve songs here, I think it’s more than obvious just how much of themselves they put into the music included in this disc. I applaud their work in Take Me Back, and personally I would recommend to bluegrass fans around the country this autumn.