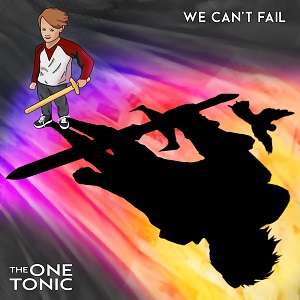 Matt Soren’s The One Tonic “We Can’t Fail” (SINGLE)

With a bold percussive beat and stirring but noisy guitar melodies, somehow an inviting harmony forms somewhere in the eye of the storm. For Matt Soren’s The One Tonic, breaking a lot of the traditional rock n’ roll rules comes standard with the territory that is the recording studio, and in the new single “We Can’t Fail,” we get an idea just how interested this act is in making music that no one else does in 2023.

Don’t get me wrong – I’m not saying that The One Tonic are changing the world with “We Can’t Fail;” in fact, I would say that they’re sticking to a pretty basic creative structure in the composing of this single in comparison to what most of their inventive peers in the American underground have been doing lately. In an age of surreal pop ideals and indulgently cathartic choruses almost everywhere we look and listen, here we find an act that looks back at the history of alternative rock in search of a relative kinship between today’s thoughtful verses and yesterday’s supreme tone (especially in the lens of new wave and indie rock). The One Tonic finds a space between the lines of critical consensus in “We Can’t Fail,” and it’s a space I think listeners should explore if they’re in the mood for an alternative sound that truly lives up to the banner.

There are subtle details inside every corner of this track, from the bass to the drums and back to the vocals, and I don’t think that it was designed specifically with the notion of overwhelming the audience as much as it was showing us the tonal dexterity of the artists who shared the recording studio for this performance. The lyrical content here isn’t quite as potent a force to be reckoned with as the instrumental wall of melodies is in “We Can’t Fail,” but had either of these elements been changed in any way, I’m not convinced that this single would be as captivating as it is in this present state. There’s a pressure in this mix we can’t escape, and it makes even the most muted of elements feel like something over-the-top and impressive.

Despite the vast amount of options you’ve got in the underground rock scene this January, I don’t think you’re going to find a postmodern and cerebral offering from an alternative rock band as you will in The One Tonic’s new single right now. “We Can’t Fail” is a serious indie rock song that lives outside of the mainstream realm just enough to feel like a real rebel, but although it’s rooted in crossover aesthetics that some would just as soon dismiss as being too impure for the serious audiophile to appreciate, I for one think it’s a fair hybrid of stylistic components that can satisfy one crowd just as well as it could a more distinctly discriminatory one. That’s not often the case with content in the alternative lexicon, let alone in the output of contemporary rock bands these days.