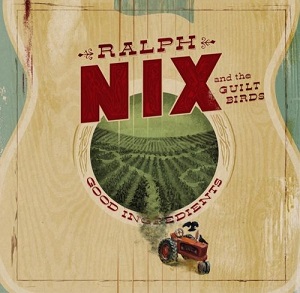 The guitars grow into beasts as we waltz through the opening bars of “Retold,” one of ten tracks to be discovered in Ralph Nix & the Guilt Birds’ Good Ingredients, but this won’t be the only time that they exert their dominance over everything else in this awesome new album from the Americana crew. “Cohay,” stripped down to its nuts and bolts, is stylized around its string play and the evocative churn that it uses to colorize Nix’s lyrics.

Though executed at a different pace than those two songs, “Stella” is just as much a harmony-centric piece as they are, and even if it didn’t have a single lyric in its several minutes of sonic bliss, I have a feeling that through its moving musicality, we’d still understand the narrative that the band is conveying to us here.

Pastoral poetry is a staple ingredient in the recipe for success that Nix and the Guilt Birds try out in Good Ingredients, and in “Falls,” “The Wish” and “Whiskey Drink’n Women,” it becomes so rousing that it’s hard to engage with anything else going on in the tracks. I’ve listened to a few of the records that this band has put out prior to this one, and I’m not sure that Nix has ever been this vulnerable with fans before. He’s regaling us with a few tall tales in between the beats, but I get the vibe that the message here is a lot more complex than its highly stylized cosmetics would have us believe. It’s personal, it’s intimate, and more than anything else, it’s as American as apple pie.

I would have preferred a little more urgency as the record enters its second act after “Cohay,” but the fluidity of the material is rock-solid nonetheless. “Call Me Baby” and “Falls” take us into a darker corner of the band’s songwriting than I was expecting to hear in this record, but it balances out some of the looser, more instrumentally-focused material that we get started with in “Window Shopping” and “Mercy Me.” Ralph Nix and his well-chosen cast of supporting players don’t waste our time with any filler in Good Ingredients; from the time we get lost in the slow grind of the first song to the very moment when “The Wish” disappears into the ethers from which it came, this band is hitting it hard and playing as if their lives depended on it.

There are a lot of really good records coming out in the next few months from artists in rock, soul, pop, blues, and country music, and though Good Ingredients was conceived with a very specific audience in mind, it’s a strong effort from a skilled band of brilliant musicians who are keeping the flame of Americana burning as hot as it did some half-century ago (and taking parts of every aforementioned genre to do as much). The more surreal moments in Ralph Nix & the Guilt Birds’ new album fit in elegantly with the alternative country movement’s new look entering 2023 as well as that of southern-style indie folk, but make no mistake about it – this is as original a sound as you’re likely to find all year long, regardless of genre or scene.

Share
Previous Matt Soren’s The One Tonic “We Can’t Fail” (SINGLE)
Next Taydem Shoesmith “Are You Clapping?” (SINGLE)