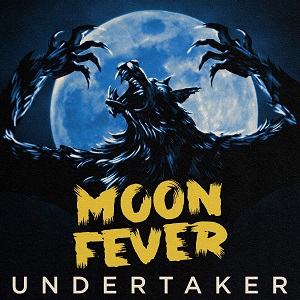 There’s nothing particularly unconventional about the way that Moon Fever attack the opening bars of their new single “Undertaker” on the surface; there’s a lot of distortion on the riff, plenty of adrenaline behind the percussion – though the rhythm is more pendulous than it is rushed – and the sense that we’re about to hear an anthemic vocal come screaming out of the background at any moment, but something is still amiss. Folding from the outside of the beat-in, we’re slowing being sucked into a whirlpool of testosterone-powered harmonies that seem to fuse much of the chest-pounding intensity of the old school with something a little leaner and meaner in aesthetical fluff, and the combustion that comes next from within the music is something most any rocker will be happy to hear this October.

The lyrics aren’t quite as memorable as the way they’re unleashed on us is in this single, but in the context of the music video, I think they feel scathingly commentarial about the current modus operandi of the mainstream music industry. Moon Fever are playing to a certain model that definitely isn’t anything new to most of us who keep up with the rock n’ roll underground here, but they’re doing it in a way that almost seeks to rebel exclusively against a bloated FM dial rife with more oldies than goodies. They’re not bringing in a lot of synthesized catharsis or samples that would otherwise belong in a new rap single; they’re letting their chops as players do all the talking, which isn’t something I can say for many of their rivals at the moment.

Instrumentally speaking, the way everything has been layered together in “Undertaker” is a little nauseating at first glance, but as we get into the thick of the song, there’s no turning back from the grind Moon Fever start to turn out as though they were always preparing for this particular moment in the recording studio. The fluidity in their musicianship is something I really wouldn’t have expected out of a rookie indie rock crew had I not already heard “Fever” and “Shaking off the Evil” earlier this year, and if it’s indicative of their standard as a group, they’re going to be on the commercial side of things sooner than some would anticipate.

As much as some would like for you to believe that the future of rock music has never been more in question than it is right now in the middle of 2020’s autumnal season, I don’t think this is anywhere near the case when I listen to the new stuff coming out of the underground – starting with content like that of Moon Fever’s. “Undertaker” doesn’t teach us anything we didn’t already know about the capacities of rock as it currently exists in this century, and though you can’t confuse Moon Fever’s distinctive sway with the pummeling intensity of Led Zeppelin, you were never supposed to. This band is looking forward, not backwards, and that’s going to help them more than anything else in this career.