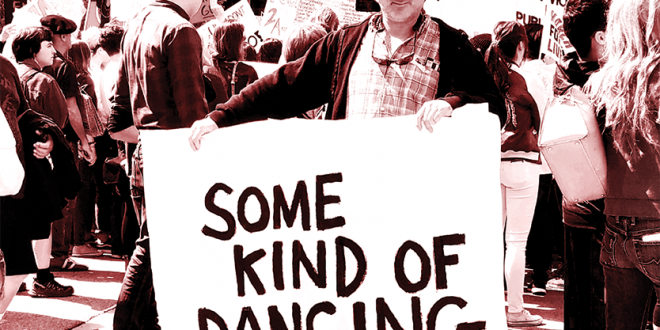 Nate Smith – Some Kind of Dancing

Anchored by the riveting single “A Girl Named America,” Nate Smith’s new album Some Kind of Dancing is a poetic slice of viciously dark Americana as imagined by one of our generation’s most provocative songwriters. Smith’s last album, Around and Around, captivated critics including myself with its delicate prose amidst stern social commentary, and while I was expecting that I would enjoySome Kind of Dancing, I was completely blown away by how spellbinding every song on this new record is. Smith portrays America as a beautiful, flawed and complicated woman whose strength is infinite though bloodied by the strain of our modern times. I’ll say it now – this is an album that every American needs to listen to this year, regardless of political affiliation.

Music doesn’t have a say in our elections, but it certainly makes for a fitting soundtrack to all of the mayhem and macabre that we become surrounded with in their wake when it’s as stylish as Some Kind of Dancing. Nate Smith’s evocative lyrics stir images of war torn American streets battered by protest and oppression, revolution and evil’s backlash. One is inclined to picture a city where once lived one thriving generation after another now in a black and white haze of depression and ugliness. Smith doesn’t back away from the crude desolation that he sees; he forces us to look at what we’ve become and find some way to atone for our hand in the whole mess. It isn’t a self-righteous message; it’s a call to arms for anyone left who cares.

In an era when it feels like no can stop the rain, Nate Smith has made a record that transcends the traditional barriers of folk/rock and expands into experimental territory, all while carrying forth a much needed message of hope. Lyrically Some Kind of Dancing is a very jarring affair to consume in a single sitting, but those with the emotional depth to undertake its 11 tracks will find themselves witness to one of the most moving listening experiences I’ve had the pleasure of reviewing in my career. You don’t have to be a diehard folky to get chills when the electrified echo of “The Flood” penetrates your speakers and oozes into your consciousness.

Some Kind of Dancing goes well beyond anything I could have expected in a 2018 release and cements what I’ve always known to be true – Nate Smith is one of the most brilliant players actively in the game today, and his prolific body of work continues to become all the more fascinating to experience. He’s delivered what is easily the best album of 2018 of any genre and I’m not the only critic who thinks so. As a country, we ask a lot of our singer/songwriters and Smith has humbly obliged us with everything we could have dreamed of having in a politically charged record aimed at bringing us together for at least eleven songs’ time. I can’t wait to see where the future takes him, and the next chapter in his story officially begins this September 28th.