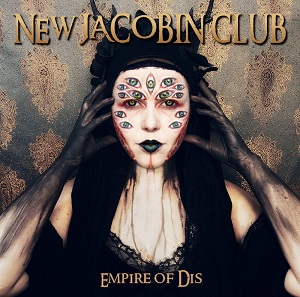 New Jacobin Club blends an unholy mix of horror movie imagery, Lovecraft-influenced subject matter, and hard rock ingenuity into a memorable ten song stew entitled Empire of Dis. It’s the band’s sixth album and their first in nearly a decade, but don’t let that mislead you. New Jacobin Club hasn’t lain fallow during that time. They’ve maintained an active live schedule, involved themselves with offbeat projects such as soundtrack work, and it’s probably true we would’ve have gotten their studio return far before now if not for COVID-19.

No matter. There is no time like now. It is beyond any doubt that New Jacobin Club embraces theatrical “shock rock” with the same zeal as older and similar performers; this review can supply a list of such bands, but to what avail? What truly matters is what is here in front of us. Empire of Dis doesn’t pretend to be anyone else and opens in emphatic fashion with the song “In Crimson Snow”.

The relentless and expertly played instrumental attack has fullness that doesn’t sound like a studio creation. New Jacobin Club’s instrumental attack, instead, has a natural sound. The band’s longtime leader and guitarist Xerxes Praetorius Horde is the primary lead singer for this tune and, by far, leads the way for the album’s songs, but the story doesn’t end with him. His vocal partner Poison Candi contributes a great second lead vocal without ever displacing Horde’s role in the song. She complements it.

Intense knife-edge guitar riffing opens “The Hunter” and Mistress Nagini’s synthesizer lines punctuates the song. Horde sounds like a chemically enhanced madman riding on top of The Rat King’s ferocious backbeat, but it isn’t the only gear that this song knows. New Jacobin Club’s shifts late in the song are especially impressive. It isn’t many bands who can couple outright guitar fury and prog-like synthesizer textures. The lyrics are straight-forward and bristling with attitude.

“Behind the Veil” is one of the album’s best moments. New Jacobin Club sound far removed from their early days as a trio hailing from the Saskatoon in the Canadian hinterlands as the album and this song alike are thoroughly steeped in modern metal. “Behind the Veil” highlights an element of their sound that likely doesn’t get enough credit – the importance of the band’s rhythm section.

The Ruin’s bass and The Rat King’s drumming benefits from excellent production, but their lithe yet fierce rhythm section attack will likely knock listeners for a loop each time out. Horde steps back from the lead vocals, but lays scintillating rhythm guitar playing throughout the song. Nagini’s synth flourishes again add important color. We’re in different territory with the song “Gloriana Engine” as gossamer-thin Nagini synth color accompanies the pairing of The Ruin and The Rat King opening the track in tandem with deceptive simplicity.

Electric cellist The Luminous joins near the end of this extended introduction. Their presence, however, soon vanishes as the song shifts gears a handful of times before finally settling into the first verse at past the two-minute thirty second mark. This is a band that is going to do things their way and bring you along for the ride – if you dare. New Jacobin Club demonstrates strong conceptual tendencies with songs such as this that the album should be exploring and this song rates as one of the finest on this collection. Empire of Dis isn’t for everyone, but it’s an embarrassment of riches for me and holds up under repeated listens.