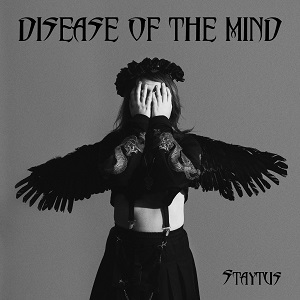 Staytus “Disease of the Mind” (LP)

After decades in the dark, grunge has been flexing some serious influence over contemporary rock and hip-hop in the last couple of years, and this influence is definitely heard in the new album Disease of the Mind by Staytus.

Staytus doesn’t reflect any sense of confidence in this LP; contrarily, doubt, angst, and reserved emissions are a core theme of Disease of the Mind, bringing to mind the dirge of Soundgarden and the buzz of deeper underground acts like the Melvins and Gruntruck. Both compositionally and sonically, this is an act that takes after the Seattle sound, but the surface aesthetics are much more of a hybrid than any straight-up throwback would allow for. This is a very appealing album, and not just for those of us who are addicted to a strong heavy rock sound.

The mix here really emphasizes grit, particularly in “Dreams From Hell,” “None of It,” and “Crawling.” I don’t get the impression that Staytus has a problem with instrumental impositions, primarily because there’s a threatening tone to most of the riffs we find in this album. If Disease of the Mind was made to be conservative, I don’t know that we would be able to appreciate the emotional songcraft that is going into making the tracklist everything it is. “Nevermore” is another good example of the poetic dexterity of this piece as a whole, and I don’t know that these songs could share the same space without their creator affording us the kind of passion she does around every turn here.

Everywhere we listen in Disease of the Mind, there’s a strong guitar element waiting to come crashing down on us, and I found the melodic underpinnings of “Really Gone,” “Part of Me,” “Hourglass,” and “Nevermore” to be especially fetching. There aren’t many instances in which Staytus sounds unsure of herself here, but when she’s able to run with a harmony just a little further than we would expect, the catharsis she can tap into is brilliant. Say what you will about the moderate excesses included in this material, but I don’t think you’d be able to show me another player putting it to good use as much as this one is in her debut album.

Anything can be fine-tuned, but among those who have dropped a rookie release in the past year, I would have to say that this is an act that sets itself well outside of the standard in the best way possible.

There’s a lot of potential in Staytus moving forward, and if there’s a key theme to walk away from Disease of the Mind with, I think it’s that. The creative parameters are not very limiting for this player, and although there’s something to the heavy metal revival we’ve been seeing so much of in the American underground over the last few years, I like what this grungy tone is doing for indie acts as well. Staytus is rocking it like few others in or outside of her scene, and in Disease of the Mind, she sounds like an artist who isn’t going to be contained within the realm of the underground for very long at all.