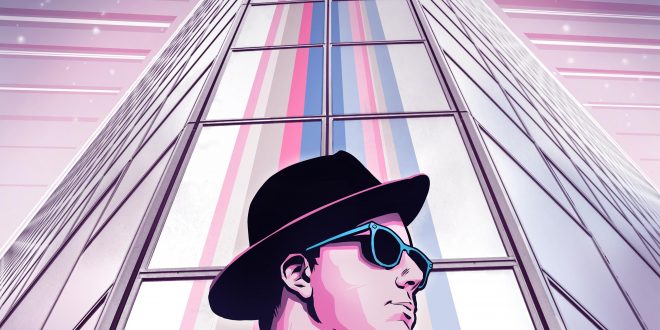 Paul Jacks wasn’t content to simply recycle the cosmetics and engineering of the underground sensation Smile Ease, with whom he has served as the frontman for the last eleven years, in his new solo album Defractor. Inside of eight boldly appointed songs that tie into each other both sonically and lyrically, he cuts loose and shows us a totally different dimension of his musical profile. “My Heart is a Book,” and “Nightwave” are straight out of the ambient pop playbook, while more pensive numbers like “Laid to Rest” and “Lightyear Radio” celebrate his cerebral style of writing. Audiences who were hoping to find a daring treasure chest of indie nuggets won’t be disappointed by what this record brings to the table, as it undeniably elevates his iconic sound to the primetime like never before.

Two of my favorite songs from Defractor are “Lightning Lobotomy” and “Thief for Your Love,” and I wasn’t just attracted to them because of their affectionate (though spacey) hooks. Paul Jacks comes off very vulnerable in these lyrics, eluding to an emptiness that is tragic and yet impossible to ignore. His emotions are on full display as he dispatches soaring vocals that are translucent in this glaring master mix, which is startlingly physical and brooding from beginning to end.

There’s shades of punk rock, early house music and even a touch of 1960’s psychedelia that merge and meld together elegantly in Defractor, but the shared narrative of the songs never gets lost in the fluffy basslines and gargantuan synthesizers. If we strip away all of the frills that isolate the melody in “Spy in Me,” there’s still plenty of tonality in the bones of the composition itself to suggest that the magnetizing energy of the track isn’t coming from the beefy equalization alone. “Mister Rollercoaster” is another good example of the conceptual production value of this record, but to be quite frank there isn’t a track on the album that doesn’t feature a really compelling framework for hardcore music enthusiasts to gleefully analyze.

Defractor is one part dance record and another part hypnosis session, and though that might seem like an impossible marriage of styles for even the most experimental of pop records to survive, Paul Jacks manages to balance his diverse sound with little difficulty here. “Laid to Rest” flows right into “My Heart is a Book,” as does “Nightwave” and “Lightning Lobotomy,” not dissimilar to a more theatrical progressive rock piece. The music is gluttonous to put it mildly, but it isn’t spiked with egomaniacal attitude or even the notion of arrogance on the part of Jacks.

Brilliantly produced and slickly arranged for fans of both mainstream and underground pop/rock, Defractor is the perfect record to start this autumn with if you live for urbane indie music in the vein of such legends as Television, My Bloody Valentine and Berlin-era David Bowie. Paul Jacks is redefining his incredible sound for an audience that has been desperate for original grooves in recent years, and this LP encapsulates his tremendous growth since first joining Smile Ease eleven years ago. If this is just a taste of what we can expect out of his solo work, you can bet that his ascent through the indie hierarchy won’t be coming to an end anytime soon.

User Rating: Be the first one !
Share
Previous Madelyn Victoria’s new single “Right Here With You”
Next Project Grand Slam release “Tree Of Life (Dedicated To The Victims)”