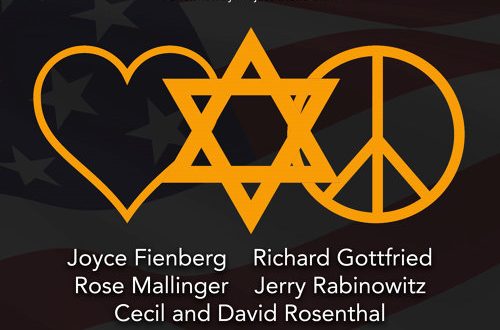 “Tree Of Life (Dedicated To The Victims)” is a song recorded in honor of the eleven victims of the tragedy that took place on Oct. 27, 2018 when a gunman shot and killed  members of the Tree of Life synagogue in Pittsburgh. It’s also dedicated to the twelve college age people who were gunned down in California, which it was written directly in the aftermath of, to get involved and help do something about the plaguing gun control problems across the country. It’s a whole lot of nonsense that simply doesn’t have-to happen but does because of what many say is poor leadership in the past three administrations.

It’s the responsibility artists have, but only so many can take when these times happen for whatever reason, so it’s never anything to take lightly when they step up for a good cause. It’s the right thing to do and anyone who takes that responsibility is going above and beyond the call of duty because of these odds. I always commend any efforts to help the community recover from a bad situation, so “Tree Of Life (Dedicated To The Victims)” got top marks from me before I even heard it. And I have-to admit I was expecting something a little more up-tempo and-jazzy from them, but then I digressed over it only being two members of PGS and loved hearing the song.

The two band members of PGS this involves are the talents of the exquisite Baden Goyo (piano), and the dreamy vocals of Ziarra Washington (singer). The song was written by the band leader, Robert Miller and mixed by Lou Holtzman and it’s a powerhouse combo between the writing and studio performing. It’s imperative that Miller take notice of these two band members chemistry together and ponder more of the same, even if not for charity causes but it would be a killer duo for that outlet because this song is proof. It could also just be my fluke radar going off but it’s worth suggesting.

We can’t rely on anything the Government does when it comes to gun laws and that has been proven, it’s up to the people to come together and get these legislations or they’ll never happen. At the end of the day it’s not being done, but a lot of talk keeps going on about it and the division remains, but the problems don’t get solved by way of discussion. It takes-action, and this is Miller’s one piece of it to distribute to the masses and let them respond in kind with a donation for it.

There’s no better way to mend the subject than to get involved however you can, so this song goes the distance. It’s as simple as that, a grand effort with all stops pulled out for a sympathetic ballad of colossal proportion with 100% proceeds to the families of the lives that were lost over the madness that never seems to stop. You can’t make this up any easier than the events it is about, you can only be a supporter of it or not, and it is my strong recommendation that the masses seek this out and help its magic heal and the proceeds will follow.

User Rating: Be the first one !
Share
Previous Paul Jacks releases Defractor
Next The Danbees release The Veggie Tapes (EP)