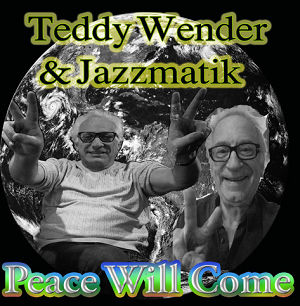 “Peace Will Come” by Teddy Wender

I don’t know about you, but I feel like there’s never a bad time to hear a song that lifts the good ‘ole spirits. In the new song, “Peace Will Come” from Long Island, New Yorker Teddy Wender, the swelling rock and roll blends meshed with some soul and bluesy tones makes for the perfect combination. It’s an elevation of love, joy and a solid groove. Wender’s tickling of the ivories and his raspy vocals cater to all audiences – this is one to sing along to and enjoy life all the more.

Wender, despite his rugged vocal prowess, has a balance of tenderness. He has a sweet streak running directly down his delivery. It’s not impossible or unlikely, that people can live together, he sings. He reminds me of a mixture of Randy Newman and Billy Joel. In fact, if you’re a fan of the Joel’s “River of Dreams” than you will definitely love this track. Maybe now peace will come…to everyone, to everyone, Wender sings in the chorus.

The backing music is solid and a combination of the electric organ and from what I can gather is a faint rhythm section. I couldn’t tell if he was playing the electric keys to have a guitar effect, or if there was a lead guitar, but the honey-blend with the guitar is very smooth. It’s very melodic and adds my dynamics to the piece. The piano arrangement surprised me – aligned with Wender’s voice, it percolated to a higher energy level. It was quite unexpected. When he plays, it’s a wild mix of vintage 70s soul and speckles of modern day tones. It felt very New York and perhaps characteristic of a city that has so much diversity. The piano work itself in “Peace Will Come” is another entire story running in tandem with Wender. I often notice piano work from singers, but not like this. This felt incredibly special.

After the song’s bridge, Wender brings in some backing vocalist to give it more of a worldly sound. The resulting depth added some textures to the vocal aspect. I felt like Wender already had a great deal of character in his voice, and this was yet another bonus. You feel the presence of a larger body of voices, like the world is definitely coming together. It made me feel like something sacred was forming, like the synergy happening between the voices and the words created this magical moment.

I had goose bumps. I closed my eyes and imagined this song being played in Central Park, and all the while people and families are going about their day, this song strikes their attention. I suppose it transported me to a Spring afternoon, perfect weather and not a cloud in the sky. Wender’s power is in the message and his song vehicle races to a lovely, winning finish. “Peace Will Come” is easy to sing along-to, and I found myself going back to it throughout the day. There I was, chasing those echoes and this joyful earworm took over. Now, if that isn’t a great song, than what is?